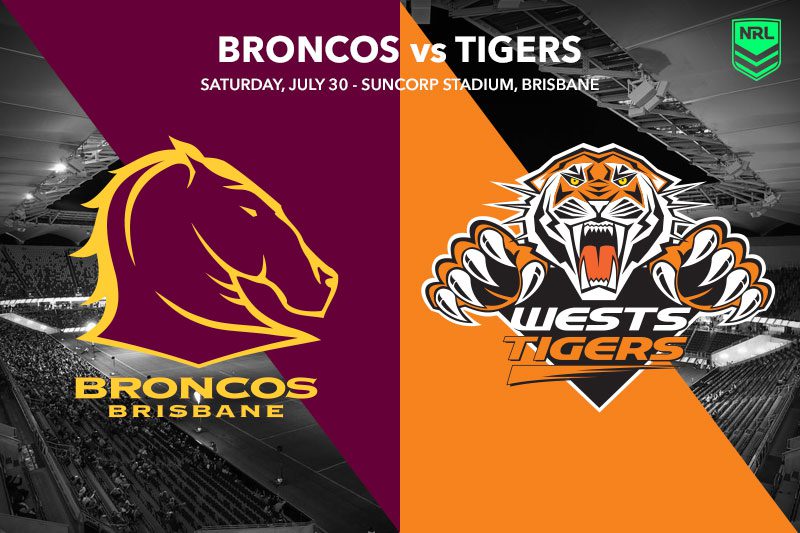 The Brisbane Broncos will continue their charge to the NRL top four when they take on the Wests Tigers at Suncorp Stadium on Saturday evening.

Brisbane have navigated a tricky mid-season period and come through the other side, while the Tigers are still trying to figure out how they didn’t leave Townsville with two competition points.

Brisbane come in at just $1.13 and it’s hard to argue they shouldn’t be that short. They were impressive against Parramatta in their last start and have won their previous three games.

They might be without Herbie Farnworth and Selwyn Cobbo in their backline, but it hands an exciting opportunity for Deine Mariner to make his NRL debut at left centre. While Cobbo will return in the coming weeks, Farnworth is unlikely to return for 2022 and it gives Mariner a chance to nail down a spot in the run to the finals. He could be a good omen bet to score a try at $2.80.

The middle forwards in Patrick Carrigan, Payne Haas and Tom Flegler have too much muscle and skill up front for the Tigers to match, so it is hard to see the Broncos losing the battle in the midfield.

The home favourite survived an all-time scare from a team that was a $9 outsider last week, but the Broncos should be good enough to secure a 13+ margin win at $1.53 with BetOnline. A Corey Oates double at $3.30 might be a good look for some value as well.

The Wests Tigers were robbed last week. The NRL robbed them of what would have been one of the finest hours in the club’s history.

If you’re ever a $9 outsider in a two-horse race, you’ve been having a bad time of it.

But they won. And then the NRL took the game away from them in some of the most illogical decision-making the sport has ever seen.

How does a team that is outmatched on paper mentally move past the injustice of last Sunday in order to try and pull off another huge upset win? The short price for the Broncos certainly reflects that line of thinking, as does the +18 head start.

While Brisbane have piled on the points in many of their wins this season, the Tigers showed last week that you can’t just rock up and expect to throw the ball around and score. There has to be a method to the madness and the Cowboys didn’t respect them enough for much of the game. It almost cost them dearly.

If Brisbane are able to turn up with the same focus they’ve had for most of 2022, they’ll run up a cricket score and the 18-point handicap won’t be enough. But if they don’t learn from the Cowboys’ mistakes, Wests are back in the frame – not to win, but to cover that line.

Daine Laurie was the best player in a loss last week, and at $3.60 he is great value to score a try for Wests.

Adam Doueihi is the Tigers’ best player and he set up what should have been the winning try against the Cowboys. Ezra Mam hasn’t had much fanfare in his debut season due to Adam Reynolds being his halves partner, but he absolutely should be in the box seat to win the NRL Rookie of the Year award. Two fantastic five-eighths who will feature prominently.

We like Brisbane to win by 16 points, so get on 13+ and the Tigers to cover the line. It’s Saturday – get wild!

Brisbane to win by exactly 16 with Corey Oates scoring a double is a $43.51 chance at Ladbrokes.