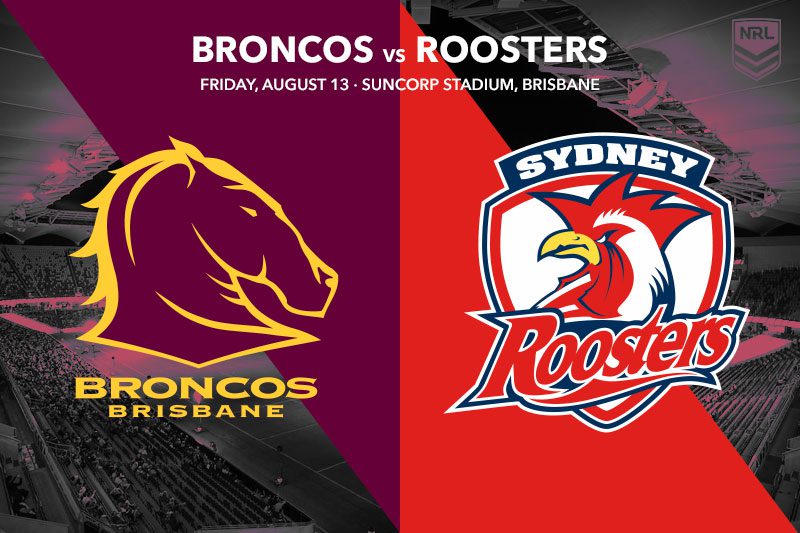 The main event of the NRL’s Friday night double-header at Suncorp Stadium sees the Brisbane Broncos play host to the Sydney Roosters. The two clubs played in one of the more controversial games of the season back in Round 11 when the Broncos pulled off one of the biggest upsets in NRL history as $13 underdogs, so you can bet the Chooks will be out for revenge.

Brisbane have made several changes to the team that lost to the Knights last Thursday, with Xavier Coates, Albert Kelly and Tom Flegler headlining the alterations to their line-up. Kelly recently re-signed with the club, while Brodie Croft’s impending exit almost certainly means he won’t wear the Broncos jersey again. At the other end of the spectrum, Coates is being given a reprieve of sorts before he heads to Melbourne at the end of the year.

The Roosters have Dale Copley named on the wing after signing for the rest of the season from the Broncos, while Naufahu Whyte will get a first-grade debut in jersey no.17. Three of their listed reserves don’t even have a headshot next to their names on the team list, so the squad is right down to the bare bones.

Sydney’s alarming lack of personnel is a big factor in the Broncos being at the $4.60 mark with online bookies and not a much longer price. Brisbane were able to cover the line against Newcastle and did so in their previous two games before that, so can they catch the Roosters at the +14.5 line down on troops and on something of a short week as well?

Corey Oates is getting closer to his best form and is fresh off a try last week. He has four tries in his last seven appearances against the Chooks, so he will be right in the mix at $1.91 to score at any time. Xavier Coates may be the shortest-priced Bronco at $12 to score the first try, but the outsider who might salute at a nice price is Selwyn Cobbo at $23 over on the right edge up against Adam Keighran playing out of position.

What other club would have an injury list that stretches into the double-digits yet still come into an NRL game as a $1.21 favourite? The Sydney Roosters have a place in the top four right in front of them, so expect Trent Robinson to have his side ready to win by any means necessary.

The $3.60 for a 1-12 win for the Chooks looks a great number to try and get on. It just feels as though the Chooks will eventually start having the injury curse overrun them and will be made to toil hard for a win. Traditionally they’ve had some issues against Brisbane at Suncorp, and the Broncos have been a tricky prospect there this season on a few occasions.

Dale Copley was the first tryscorer for Brisbane in the corresponding game in Round 11 between these two clubs, so can he do the unique double and score first again at the $9 price? Sam Walker at $20 up against the club who somehow let him get away would be painful for Brisbane fans, but it also doubles as a great outside shot for Roosters fan looking to partake in a wager.

Strike centre battles are as rare as hen’s teeth in the modern NRL, but Joseph Manu on the right for the Roosters and Herbie Farnworth on the left for the Broncos shapes up as a tantalising prospect. Farnworth has been flying under the radar for quite a while as an NRL prospect, but his time as an academy footballer for Manchester United in England has taught him great spacial awareness and how to beat his opponent on the outside with his speed. Manu’s fast feet and upper body strength make him one of the most dangerous players in the NRL, but he is also an excellent defender, so this should be an entertaining tussle.

The Roosters should get the win, but this looks like another game where the Broncos push a good side to the final whistle at home. Twice they came close to beating Penrith, while they pushed Parramatta to the brink in Round 1 and also stuffed the Chooks on the road in Round 11. That factor has us taking Brisbane to cover the line for the fourth week in a row.