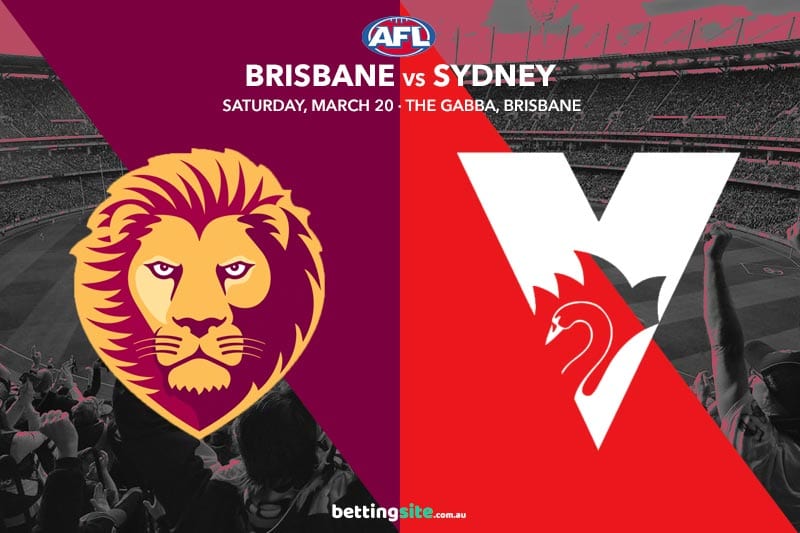 The Brisbane Lions will look to kick off their 2021 AFL Premiership campaign on the right note when they take on the Sydney Swans this Saturday night at the Gabba.

Although their goals for the year may differ, both the Lions and Swans have high internal expectations, and this contest will be a perfect platform to test how much they have improved in the offseason.

A few key players will be on the sidelines for both sides, but there is a chance Lance Franklin suits up for the Swans despite suffering a calf injury in the preseason. Cam Rayner will certainly miss for the Lions after he underwent surgery to repair his torn ACL.

Brisbane will roll out prized recruit Joe Daniher for the first time, while John Longmire will hand debuts to Logan McDonald, Braeden Campbell and Errol Gulden.

Although they will not match up on each other, Charlie Cameron and Tom Papley could be the two most important players on the ground for their respective teams. The tropical rain in Queensland will play its part this Saturday night, meaning these two small forwards need to be at their best. If the Swans are to have any chance, Papley must hit the scoreboard.

With Cam Rayner on the long-term injury list, the Lions need to find another player who can provide the same presence and X-factor going forward, and Zac Bailey is their best bet. The young utility has moved across the ground in his short career, but he put on a show going forward in 2020. The Lions are favourites to kick the most behinds in 2021, and the wet conditions could cause them trouble inside 50.

Even though the Lions have won the last two contests, the Swans easily had the wood over Brisbane before that, winning every other clash dating back to 2010. If Lance Franklin can get up for this match, there is a strong chance Sydney can win. The likes of Luke Parker, Josh Kennedy and James Rowbottom will love the wet conditions, as all three midfielders are proven ball-winners.

When it comes to dangerous small forwards in the AFL, there is arguably no one scarier than Charlie Cameron, as his electric speed and unexpected strength have caused trouble for most defenders. If Charlie gets out the back, it is almost always a goal for Brisbane. In the slippery conditions, a long kick forward early will go to ground and Cameron should crumb and goal.

Luke Parker to get 30+ disposals

Luke Parker played his best game of 2020 against the Lions late in the season, racking up 33 touches and kicking two majors despite the shortened game-time. The Swans will rely heavily on Parker’s physical presence in the middle of the ground, where he will go toe-to-toe with the likes of Lachie Neale and Jarryd Lyons.

We like the Swans at the line considering they will almost be at full strength, especially if Franklin plays. Tom McCartin is due for a great season down back and should help keep the scoring to a minimum, with Harris Andrews doing a similar job for the Lions, while we love Parker in the midfield.