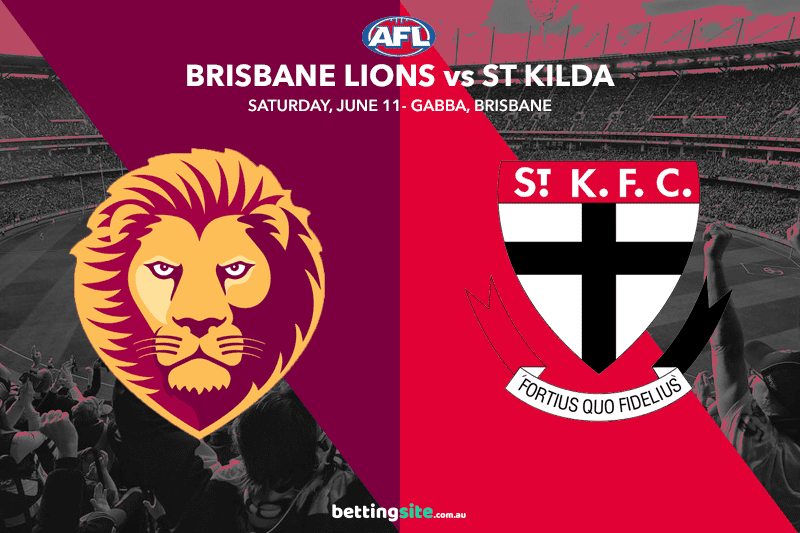 Will Brisbane keep their Gabba fortress intact when they clash with St Kilda in round 13?

The Lions were well beaten by the Dockers in round 12 when they failed to kick their standard 100 points but will be looking to bounce back hard on the familiarity of their home track. The Lions have won 14 of their last 15 games at the Gabba, making the northern road trip the most daunting in the comp.

Brisbane sit comfortably second on the ladder and will be eyeing a top 4 spot come September. Their injury list is the shortest in the league, so credit must go to their strength and conditioning personnel. Winning sporting contests is significantly easier with your best players on the park. This should allow the Lions to rotate their brightest stars to keep them fresh and firing as the season lengthens.

After their confidence boost from beating the Cats in round 9, St Kilda have had straightforward victories over the Kangaroos and Crows. Goal kicking yips aside, they are travelling well and deserve their current top 5 ladder position.

According to our numbers the Saints sit 4th when it comes to disposals, 10th in tackles, and 12th in inside 50s. They do lead the comp by some margin when it comes to kicks, which shows a strong coaching direction. The beauty of kick receives is of course the ability to pause and weigh up options before playing on, while handball receives are normally met with instant pressure.

Harris Andrews is a 202 cm key defender for the Lions who has played all 12 games in 2022. He is a prolific spoiler who is also prepared to mark over his opponent’s head. Andrews is also an effective kick out of the defensive zone, and his height means he often draws the toughest defending assignments.

St Kilda key forward Max King is having a breakout year and currently sits 4th in the Coleman Medal race. King is also 202 cm and knows how to take a big grab. According to our numbers the Saints rank only 12th in inside 50s this season, making King’s goal kicking numbers even more impressive. Andrews versus King is our key match-up here, and it should be a cracker.

The Lions are not as short as you might expect given their home record, and the line has been set at a narrow 16.5 points. The total points line is a whopping 175.5, so both teams are expected to score freely. A shoot out would seem to favour the Lions – the highest scoring team in the league, but will they be ruthless if comfortably 20 points in front during the second half, or will they slip into cruise mode? Will the Saints be wearing their kicking boots, or will they have another horror night of the yips? We are going with the Lions to cover the line here, after some debate.