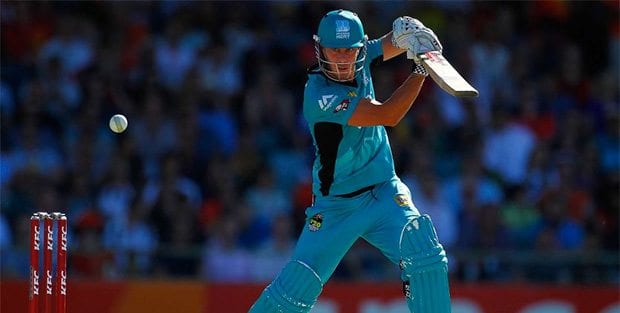 The Perth Scorchers and Brisbane Heat are piping hot in BBL06 and the punters have taken notice.

The Scorchers might sit second, after winning three of their five games so far, but that hasn’t stopped the men in orange from being backed into +300 favourites with WilliamHill.com.au.

It comes as no surprise, given this is a side that has featured in every Big Bash League final – bar one – since the competition’s inception in 2011, winning it all twice.

But they have some steamy competition coming from Brisbane, with the Heat roasting every opponent they have played – barring the Sydney Sixers.

And the interesting thing about their $4.25 odds is that the difference is negligible, even though the Heat absolutely destroyed the Scorchers in their last match.

The Scorchers batted first, rattling up 6/173, thanks largely to perhaps their player of the Big Bash so far, Mitch Marsh, who clubbed 70 off 41 balls, including five fours and three sixes. Marsh has shown the all-round ability Australia’s selectors have been craving, smashing 210 runs at 70, at a strike rate of 152.17, coupled with three wickets from just 12 overs bowled. But the Scorchers were restricted by super-talented spinner Mitchell Swepson, who bagged 2/27 off four miserly overs.

In reply, the newly crowned Bash Brothers, Chris Lynn and Brendon McCullum, made light work off the chase, putting on an unbroken 148-run stand.

McCullum was an even 50 when the score was passed, cracking four fours and three sixes off his 31 balls, but Lynn, as he has been in the Big Bash so far, was the star.

The master blaster finished just two short of his 100, his 98 coming off 49 balls, including a ridiculous 11 sixes.

Lynnsanity has now crunched 309 runs in his five Big Bash innings this campaign, at an average of 154.5. His strike rate of 177.59 betters every other player in the competition. The bloke who is second? You guessed it, McCullum (176.79).

But this is where things get very, very interesting as far as the Big Bash markets are concerned. The Australians have a one day series against Pakistan kicking off later this week and that means several teams will lose their stars for the rest of the competition.

And the Heat have become victims of their own prosperity, with Lynn earning a call up to the one day squad.

Marsh will join him in the green and gold, meaning that the top two teams lose their two best players.

But the Scorchers will benefit from the return from Test duties of all-round pair Ashton Agar and Hilton Cartwright. And forgotten man Tim Behrendorff – one of the Big Bash’s best bowlers – is also set to suit up in the coming week.

The battle for supremacy in Melbourne will also happen without a trio of Stars guns, with Glenn Maxwell, James Faulkner and Adam Zampa in the ODI squad. At least they get Peter Handscomb back, who has been one of Australia’s shining lights in the past couple of Test series’.

The Stars are at +400, ahead of the Renegades at $6, who they defeated in the Big Bash in Saturday’s Melbourne derby, avenging their loss on New Year’s Day and leap frogging the red side of Melbourne into fourth spot.

The Renegades have been given a huge boost, because their star captain, Aaron Finch, has been given the axe from the Aussie side and will now be available for the rest of the series.

With just one win from five games, the Sydney Thunder are the rank $51 outsiders, having lost superstar import Andre Russell to injury and saying goodbye to a man who has set the tournament alight with both bat and ball, Pat Cummins.

Cummins joins the Australian side as one of the Thunder’s leading men with both bat and ball, having clubbed 133 runs at 33.25 and claimed five wickets.

Sitting sixth, but only out of the four by net run rate, the Adelaide Strikers’ hopes of cracking into the finals picture have also been dealt a blow, with batsman Travis Head and uncapped beanpole speedster Billy Stanlake also getting the call up. They are given little chance at $13.

The Sydney Sixers – the only other team in single digits at $6.50 – were perhaps the biggest winners of the recent Test series with Pakistan finishing.

They welcome back Jackson Bird, Nic Maddinson, Nathan Lyon and Steve O’Keefe to a side that is already sitting third on the ladder, with he same record as the Scorchers.

The Hobart Hurricanes, out at $17, at least get to keep their talisman George Bailey, who has been given the axe from the one day squad after a quartet of lean series’ that had the Aussie selectors hunting for more youth.

The other thing that makes this Big Bash series interesting are the injury front – and the departure of the Poms. With international commitments in India coming up, Englishmen like Jason Roy, Sam Billings (both Sixers) Eoin Morgan (Thunder), Chris Jordan (Strikers) and David Willey (Scorchers) have all departed, but teams have signed replacements already. The Thunder seized on Morgan’s national team mate James Vince and the Sixers have welcomed Kiwi gun Colin Munro.

With injuries biting the Renegades (Dwayne Bravo) and the Heat (Samuel Badree) those teams have turned to internationals in Thisara Perera (Sri Lanka) and Tymal Mills (England) – Mills set to be one of the fastest bowlers in the Big Bash.

What it all makes for is huge upheaval in the competition that has little more than three and a half rounds to go.