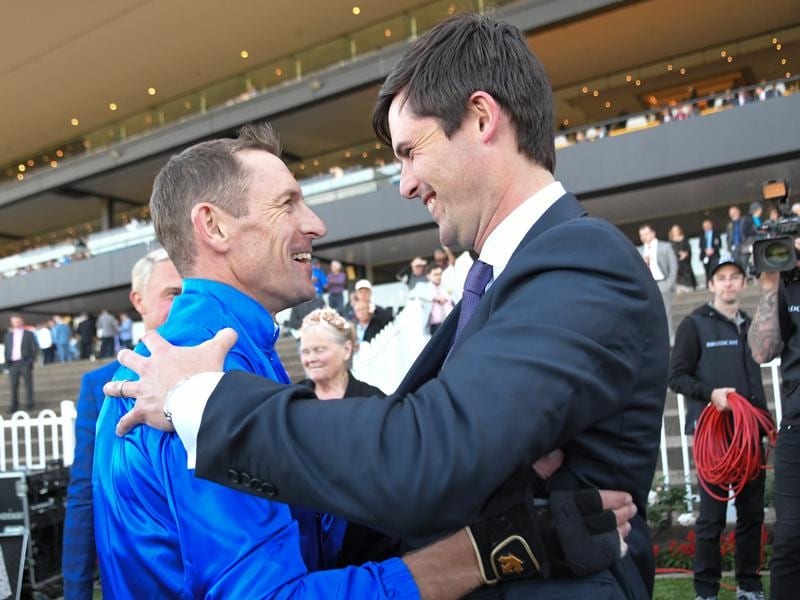 Godolphin colt Bivouac has asserted himself as Sydney’s best sprinting three-year-old with a hard-fought victory in the Group One Golden Rose, putting himself in the frame for the $14 million The Everest.

His win gave Hugh Bowman a fifth Golden Rose success and capped the jockey’s return from a broken finger that had sidelined him for two weeks.

James Cummings, head trainer for Godolphin’s Australian operation, said his team had meticulously planned the valuable colt’s preparation and taught him to extend his brilliance to Saturday’s race.

“I couldn’t help but think he had no right running the 1400 metres today but on account of the preparation he’s had and the culmination of so much effort from the unit to get behind this horse and give him this build-up he’s had was just perfection,” Cummings said

“We know the key to the horse, we’ve taught him to relax, we’ve trained him to run seven furlongs and you know what, he’s probably the best six furlong three-year-old in the country.

It’s a wonderful credit to the horse and an amazing credit to Hugh Bowman, who had a broken finger only two weeks ago.”

Cummings never doubted Bowman’s fitness to partner the colt despite the ride being the jockey’s second since he underwent surgery to his hand after breaking a finger in a track work incident.

“When Hugh Bowman said to me he was right to ride, that was good enough for me,” Cummings said.

Bowman turned in a superb ride, settling the $2.45 favourite outside the leader and Bivouac unleashed a sharp sprint in the straight, fighting back when Yes Yes Yes ($4.20) came at him to score by a short neck with Exceedance ($4.80 another half-length back.

“He thoroughly deserved it. He’s a Group One winning colt now and he’s still got plenty more in store, I can assure you,” Bowman said.

Cummings will now weigh up his options for Bivouac with the Coolmore Stud Stakes and The Everest both on the radar, while the Caulfield Guineas is less likely.

“There are plenty of options on the table and we’re in a very commanding position with a horse like him,” Cummings said.

Yes Yes Yes, ridden by Nash Rawiller, looked the winner when he ranged up in the straight but couldn’t match the late surge of Bivouac.

“He ran super. I tried to put it to Hugh and just see if I could crack Bivouac late but he was just too good,” Rawiller said.

Tommy Berry said Exceedance momentarily lost concentration in the straight but attacked the line and would be better in the autumn.