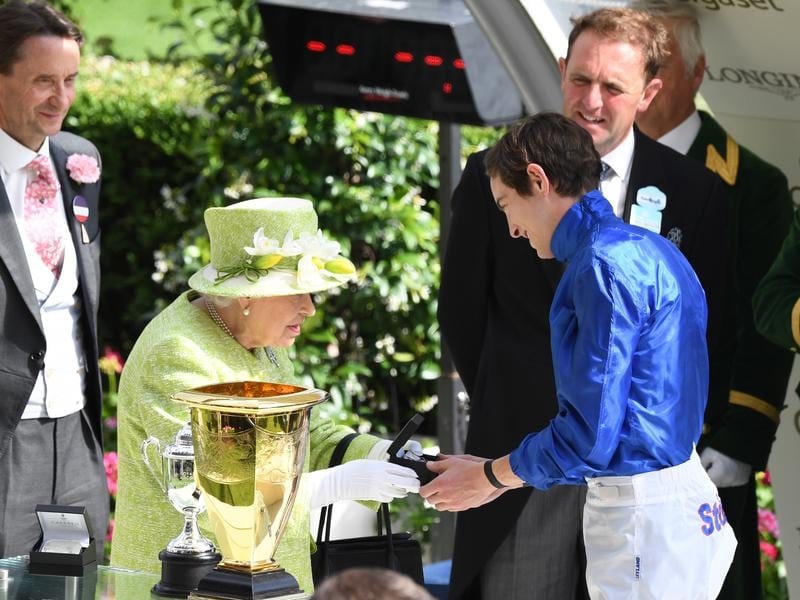 Godolphin’s Blue Point has completed the Royal Ascot Group One sprint double with a tenacious victory in the Diamond Jubilee Stakes.

Having successfully defended his crown in the King’s Stand on Tuesday, the Charlie Appleby-trained five-year-old came out four days later in a bid to follow in the hoofprints of the Australian speedster Choisir – the last horse to win both races in 2003.

When the Paul Perry-trained Choisir achieved the feat, the King’s Stand was a Group Two race.

With Kachy adopting his customary pacesetting role, the 6-4 favourite got the perfect lead into the race on Saturday (Sunday AEST) and his rider James Doyle was still sitting motionless inside the final two furlongs (400m).

Once asked to go about his business, Blue Point quickly took a couple of lengths out of the field and at that stage looked set to score decisively.

But the Sir Michael Stoute-trained Dream Of Dreams and Danny Tudhope finished with a real flourish and were only a head down at the line.

Kachy boxed on to finish third.

“I thought about doing both races after he did a great piece of work the week before the King’s Stand,” Appleby said.

“His Highness (Sheikh Mohammed) came into town a bit early and was looking round at the Ascot runners, and I said if he was happy I’d leave Blue Point in on the Saturday and let’s just dream we can win the King’s Stand and give ourselves the opportunity of potentially having a crack at the Diamond Jubilee.

“He’s going to retire this year and he’s a superstar of a horse.

“Sheikh Mohammed made the call. I just gave him the information on the horse.

Earlier on the final day of the five-day meeting, Appleby and Doyle combined to win the two-year-old race with Pinatubo.

Doyle has been the Appleby stable’s No.1 rider for Royal Ascot week with William Buick sidelined with lingering concussion issues.

“He’s (Blue Point) a horse you dream about. He’s learnt what his job is all about and has learnt with each race.

“He was a little bouncy and excitable in the gates, but he jumps and travels, just everything you need to do.

“I feel sorry for Will. This is a massive meeting for him to miss out on, but he’s here in full support. It’s great to see him.”