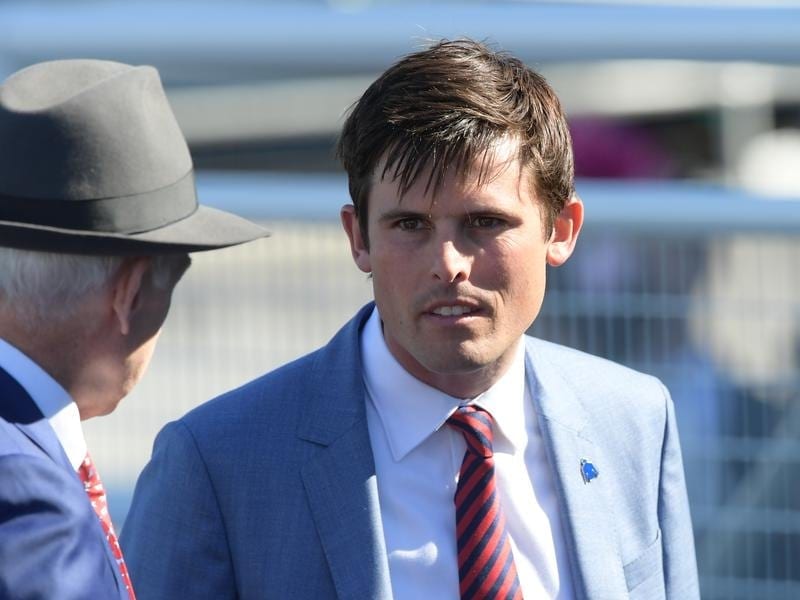 James Cummings will use blinkers on Encryption to give the colt an edge in the Danehill Stakes.

Godolphin trainer James Cummings is counting on the application of blinkers to spark an improved showing from Encryption in the Group Two Danehill Stakes.

Saturday’s Danehill Stakes field of 12 features the Darren Weir-trained Native Soldier who is high up in Caulfield Guineas markets after an emphatic win in the McNeil Stakes last start.

Encryption was fifth in the McNeil at Caulfield in the second start of his spring campaign and Cummings said he was putting blinkers on the colt to give him more confidence.

“He’s tightened up noticeably since the McNeil Stakes and with the blinkers on he’s open to more improvement,” Cummings said.

“He’s giving weight to some nice horses, but he has experience down the straight at Flemington and he’s a stakes winner.”

A winner of the Group Three Black Opal Stakes (1200m) at Canberra as a two-year-old, Encryption carries top weight of 58kg.

His only previous start at Flemington on the straight course was a second in the Maribyrnong Plate as a spring two-year-old.

Native Soldier was the $3.20 favourite on Wednesday ahead of Marcel From Madrid ($5) while Encryption was at $10.

Encryption is one of three colts Cummings still has nominated for the Caulfield Guineas.

Another is lightly raced Ranier who clashes with unbeaten colt Brutal and a number of Guineas hopefuls in a 1400m Listed race on Saturday’s program.

Ranier also has blinkers on for the first time.

“He’ll be up against a very good horse in Brutal, so we should get a good idea of where he is in his preparation,” Cummings said.

“If he can match it with Brutal I’d say he’s going to have a good prep.”