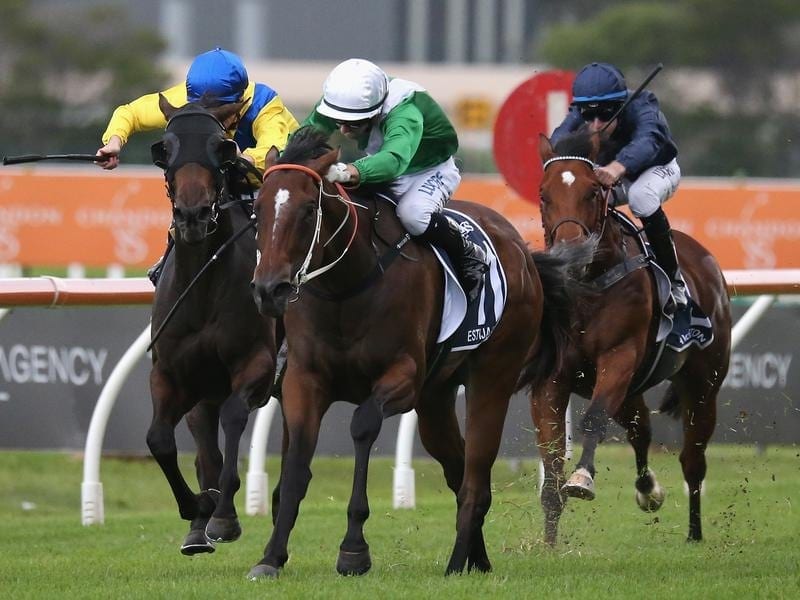 Blinkers go back on Golden Slipper runner-up Oohood (left) when she runs at Randwick.

The blinkers will go back on Oohood for the Furious Stakes, the filly’s next attempt to get rid of the unwanted tag of Australia’s best maiden.

Trainer Tony McEvoy has predicted an improved showing from the filly in her second start of the season.

Oohood is yet to win a race but was placed in all six of her starts as a two-year-old, three times at Group One level.

The filly was sent out favourite in her season return in the Silver Shadow Stakes (1200m) at Randwick on August 18 but missed a place for the first time in her career, finishing fifth in the race won by Fiesta.

Oohood wore blinkers when a close second in both the Golden Slipper and Sires’ Produce Stakes in her final two starts as a juvenile but McEvoy took them off for the Silver Shadow.

“I’m putting the blinkers back on her and she’ll run a much improved race on Saturday,” McEvoy said.

“She ran in the Slipper in the blinkers. I just thought she was getting a bit aggressive in them and I took them off, and I think it probably backfired a bit on me.

Impeccably bred filly Miss Fabulass, by Frankel out of Samantha Miss, was the $3.50 favourite on Thursday.

Oohood was on the third line of betting at $6 and McEvoy believes the filly has come on since her first-up run.

“She’s improved and her coat is starting to come,” he said.