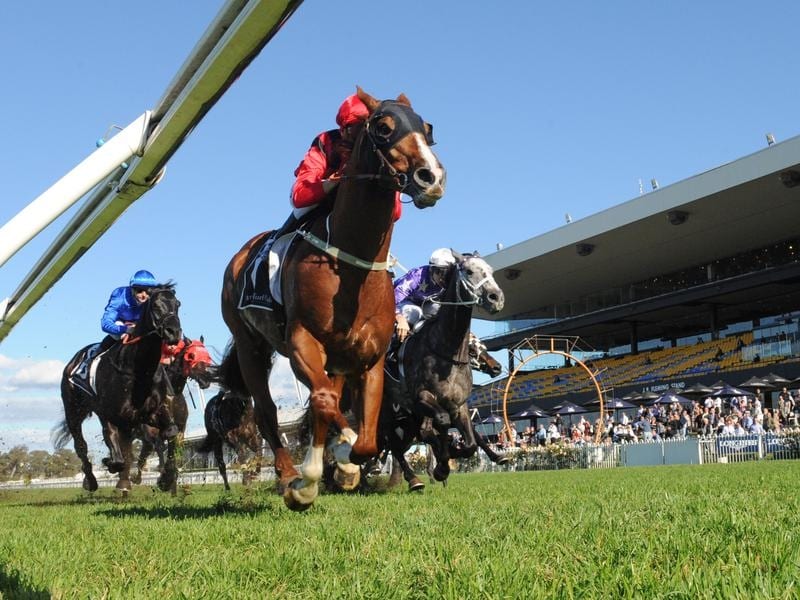 Blinkers go back on the Joe Pride-trained Passage Of Time when he runs in the Razor Sharp.

A gelding procedure produced winning results for Passage Of Time during the winter and Joe Pride believes the sprinter is on the verge of recapturing that vein of form.

The six-year-old raced more genuinely last preparation claiming wins in half of his six starts, including back-to-back victories at Rosehill in June.

Pride expects him to strip fitter for his first-up, midfield effort behind Spending To Win in the Starlight Stakes when he drew the outside barrier and closed late from last.

He has drawn ideally in gate three for Saturday’s Listed Razor Sharp Handicap (1200m) at Randwick and significantly, has blinkers back on.

“He gets his blinkers back on Saturday and that makes a big difference to him,” Pride said.

“He will get up on speed and I think it’s a nice race for him. He has trained on super and looks great.

“He won the three Saturday races last time and he’s on par to be really good again.”

Passage Of Time will be one of three Randwick runners for Pride along with last-start Kembla Grange winner Kylease and Group Three placed Superium.

Superium, who contests the CES Handicap (1100m), was first past the post in the Up And Coming Stakes but lost the race in the stewards room.

On a path towards the $2 million Magic Millions 3YO Guineas (1400m) at the Gold Coast on January 11, Superium has opened favourite in a wide market .

“He will peak for the Magic Millions but he’s fresh and ready to run a big race over the 1100,” Pride said.

“He is a good horse and I’m looking forward to seeing him back at the races.”

Kylease is also at the top of markets for the the UNSW Handicap (1200m) and Pride regards her as the pick of his trio.

“She’s got to repeat the dose now she is back in the winner’s circle but she’s more than capable She is a very good mare on her day,” Pride said.