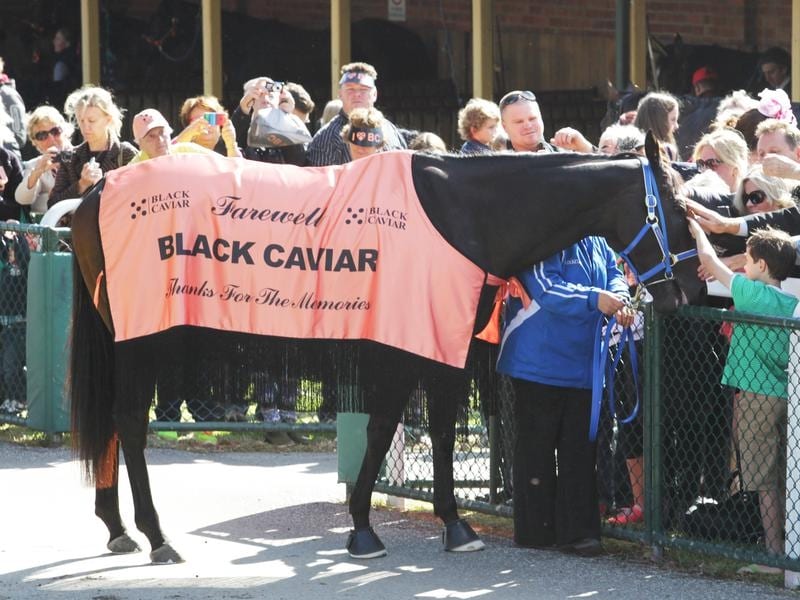 Undefeated champion Black Caviar is to return to Flemington on the race day named in her honour.

The mare will be paraded in the Flemington mounting yard before the Group One Black Caviar Lightning Stakes on Saturday.

Black Caviar recorded eight wins over the straight Flemington course, including a debut victory in April 2009 along with the 2011, 2012 and 2013 Lightning Stakes.

She retired unbeaten from 25 starts including the 2012 Diamond Jubilee Stakes at Royal Ascot.

“Black Caviar transcended racing. She is a national treasure, a sporting hero who brought Australians together,” Elliott said.

“I give huge thanks to her ownership group for recognising the importance of these champions to everyone and allowing racegoers at Flemington to see her again.

“Black Caviar, The Great Horse Race Day is named in honour of this wonderful mare and celebrates all great horses past and present.”

Since retiring from racing after winning the 2013 TJ Smith Stakes at Randwick, Black Caviar has produced six foals with Oscietra and Prince Of Caviar, both winners.

Black Caviar’s third foal is a Snitzel filly, Out Of Caviar, who is yet to race while she has a More Than Ready filly and a colt and a filly by I Am Invincible yet to be named.

She has not been served this season.

“Nelly holds a special place in our hearts and with her taking a break from motherhood, the owners felt that it was the perfect opportunity to reconnect with the fans who fell in love with her during a remarkable career,” Pam Hawkes said.