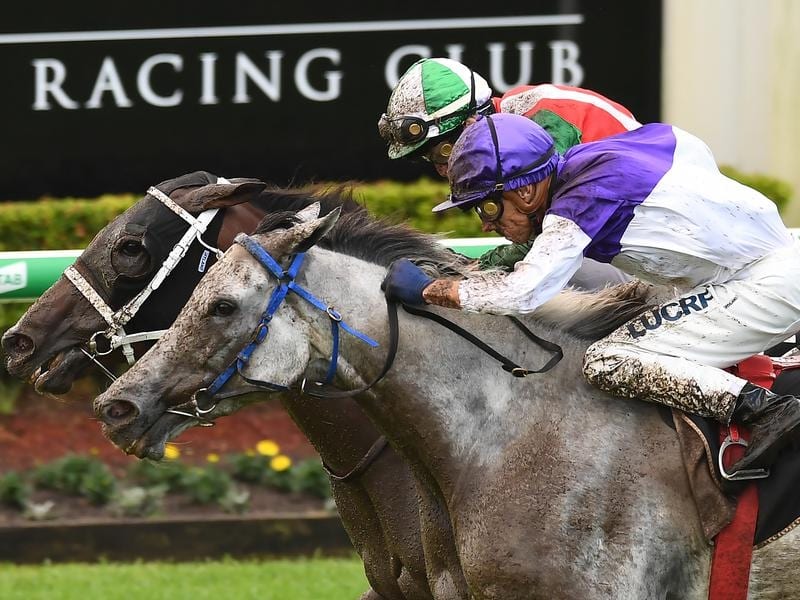 Popular grey The Candy Man (front) will be out to build on a promising record in the Premier’s Cup.

Eagle Farm trainer Barry Baldwin knows his grey star The Candy Man will get beaten one day but he hopes it won’t be in the Premier’s Cup.

The Candy Man will be aiming for his seventh win in a row when he tackles the Group Three race over 2200m at Eagle Farm.

Baldwin sent The Candy Man to the Gold Coast last Saturday where he made short work of a Class Five race.

The Candy Man faces a sharp rise in class on Saturday but Baldwin feels he deserves a chance in better races.

The veteran trainer has had many good horses including the Stradbroke Handicap winner La Montagna and stakes horses such as Baggio, Roulette, Meg’s Ego, Burdekin Blues and Rum Dum.

But he admits The Candy Man holds a special place for him.

“He is developing a bit of a fan base. I suppose it is because he is grey, races in Gunsynd’s colours and he has beaten the odds with a shattered jaw,” Baldwin said.

“I know he will have to get beaten one day. Horses like Black Caviar and Winx are on a different level when you are talking about consecutive wins.

“But I hope he races well on Saturday because he could go on to the Brisbane Cup.

“His brother (Phrases) won at 2400 metres and I would love to try The Candy Man at the trip.”