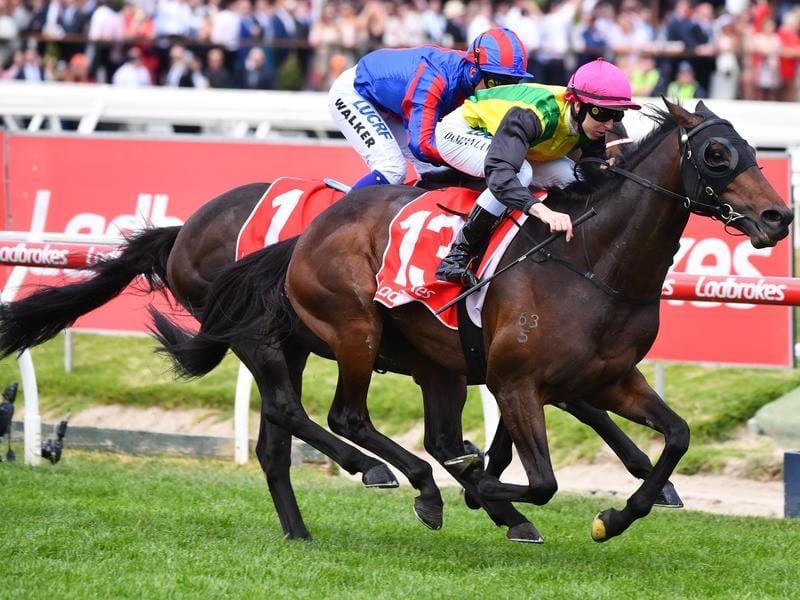 Accomplished New Zealand stayer The Chosen One has drawn the widest barrier in the Caulfield Cup.

Stephen Baster was sitting on the couch at home when he learned that his Caulfield Cup mount The Chosen One had drawn the outside barrier.

There were no histrionics, with the jockey taking the news in his stride.

Baster rode Barbaricus into third place behind All The Good from the widest gate in 2008, beaten just over a length.

“There was nothing I can do about that, so we’ll just have to see how the race unfolds,” Baster said.

“It could end up being a good barrier, there’s no rules to it.

“If we can get in three wide with some cover that will be fine, just as long as we’re still not 16-deep at the mile.”

The Chosen One earned a shot at Saturday’s $5 million Caulfield Cup after winning the Herbert Power Stakes (2400m) at Caulfield last Saturday.

But Lane’s prior commitment to easing second favourite Mer De Glace, ensured Baster got the call up.

Normally walking around at 54kg, Baster said he has to be a “normal jockey” for the week to ride The Chosen One at 52kg on Saturday.

“I’ve had to get a bit lighter, but nothing crazy,” Baster said.

“They do it every week, I only have to do it two weeks of the year, a little more exercise, a little less food and the last little bit will be sweating it out, a bit of fluid the last kilo or so.”

Baster has ridden for Baker and Forsman over a number of years, combining recently with Jon Snow, ninth to Boom Time in 2017 Caulfield Cup.

Since gaining the ride on the four-year-old, Baster has been at Flemington each morning to ride The Chosen One.

“He pulled-up well and has certainly taken no harm from the run the other day.”