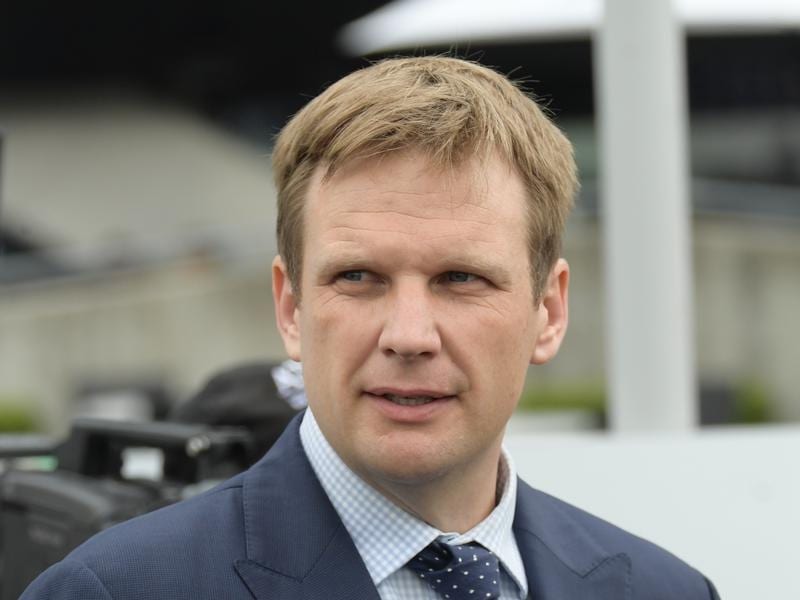 Trainer Bjorn Baker has high hopes for two of his horses at Randwick and one trained by his father.

Trainer Bjorn Baker will have two runners at Randwick but he will happily lay claim to a third if his father’s horse Bobby Dee can break his Australian maiden.

A Group Two placegetter in New Zealand, Bobby Dee is trained by Baker’s father Murray in partnership with Andrew Forsman and has been boarding with Baker at Warwick Farm since he was sent across the Tasman for a winter campaign.

Baker is happy to fulfil caretaker duties and has been pleased with the three-year-old’s recent form which includes a last-start third over 2000 metres at Randwick.

“He ran a good race last start. I think the 2400 should suit him and he goes pretty well on a wet track.”

Bobby Dee runs in the Randwick Mayor’s Cup while Baker will also take two of his own – juvenile Frosty Rocks who contests the Australian Turf Club Handicap (1300m) and Shock Alert the Kensington Handicap (1300m).

A son of Your Song, Frosty Rocks was bought for $140,000 as a yearling and made a promising start to his career with a closing third to Rule The World over 1100 metres at Canterbury last month.

He faces a rematch with the Tulloch Lodge galloper on Saturday when Baker says a distance rise and wet track will be in his horse’s favour.

“He’s a lovely grey horse and his first run was excellent plus the extra trip will suit,” Baker said.

Jason Collett sticks with Frosty Rocks after partnering the colt on debut while Jay Ford takes the reins on Shock Alert.

A son of 2009 Melbourne Cup winner Shocking, Shock Alert has won four of his 20 starts but significantly those performances have all been on dry tracks.

Randwick is expected to be rain-affected on Saturday and while Baker says those conditions are not ideal for Shock Alert, he is pleased with how well the horse has returned to training.

“He probably needs a better track but we’ve got to get him under way at some stage and he is going really well,” Baker said.

The trainer is also set to have a number of horses stepping out at the Rosehill barrier trials on Friday including promising filly Let It Pour who was Group Two placed behind Anaheed at her only start in the Sweet Embrace Stakes in March.