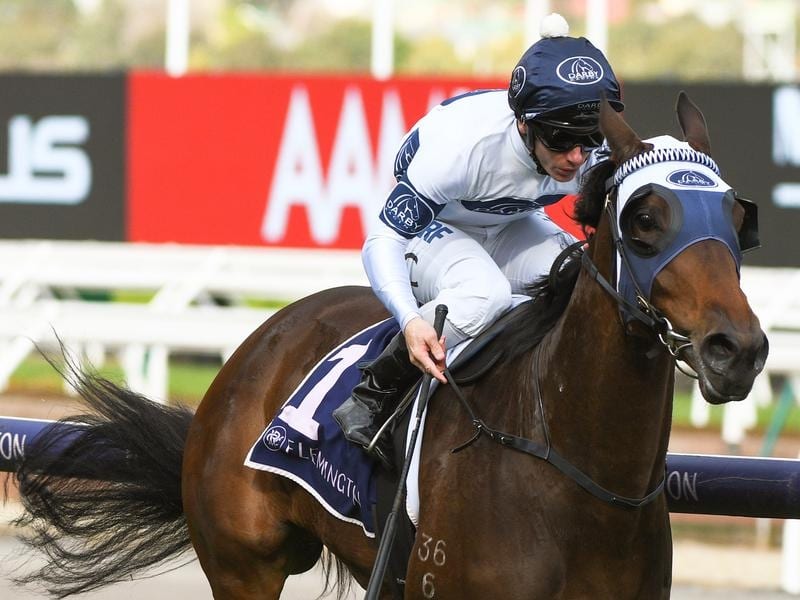 Under a well-judged front-running ride from jockey Tim Clark on Wednesday, Celestial Falls, the $2 favourite, went on to score a 1-1/4 length win from Gamay ($7), with Cape Leopard ($151) a half-length away third.

Newnham said Celestial Falls would return to Sydney to prepare for her next assignment, likely to be the Group Three Ethereal Stakes (2000m) at Caulfield on October 19.

The trainer followed a similar program last year with Greysful Glamour, who finished seventh at Caulfield before her Oaks placing.

Newnham said he would consider running Celestial Falls in a barrier trial before returning to Melbourne, although the Thousand Guineas (1600m) could be an option if the trainer considered the filly still had enough speed in her legs.

He said Celestial Falls and Greysful Glamour were similar types apart from their colour.

“This is a lovely big relaxed filly that has always shown she’ll stay,” Newnham said.

“She only had a small three-week break from her win at Randwick as a late two-year-old and I’ve always had the Oaks path in mind for her.

“This looks a nice pathway to the Oaks in its short history so let’s hope that when we get to the Oaks we can adjust that a bit and instead of running second, we get the money.”

Newnham praised Clark for his initiative in taking Celestial Falls to the lead after the filly was keen early in the race.

“It wasn’t the plan to lead but once out there she was a little fresh,” Newnham said.

“Tim did the right thing and let her stride to the front and once she found her rhythm she back off nicely for him.”