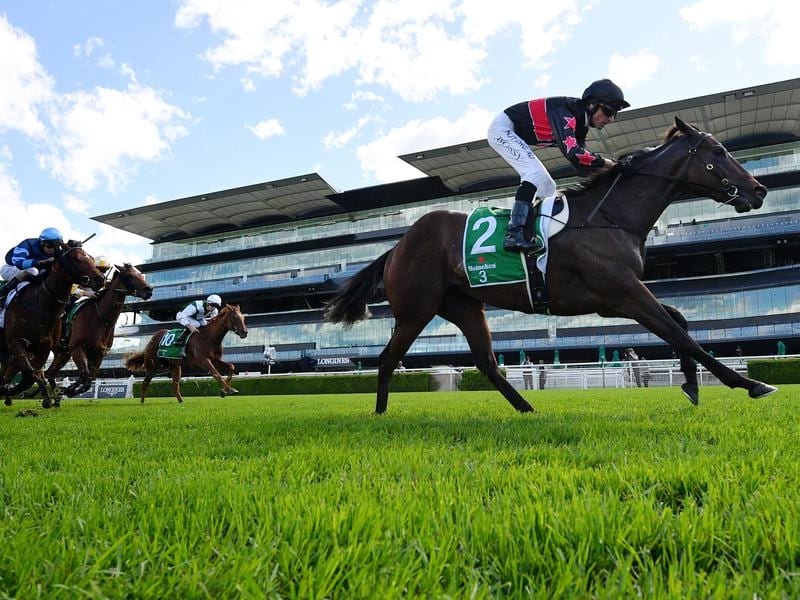 Magic Millions 2YO Classic winner Away Game is set to take on older horses in an Adelaide Group One.

The Ciaron Maher stable has announced a bold plan to run star juvenile Away Game against the older fillies and mares with a light weight in the Group One Robert Sangster Stakes in Adelaide.

Two-year-old Away Game has already had a memorable season with four wins from seven starts having competed in Victoria, Queensland and NSW.

Along with her Magic Millions Classic win at the Gold Coast in January, Away Game has also posted three stakes wins and has finished second in the Golden Slipper and fourth in the Blue Diamond.

Away Game won last Saturday’s Group Two Percy Sykes Stakes at Randwick and on Thursday Ciaron Maher Racing announced the Group One Sangster (1200m), named the TAB Classic this year, on May 2 at Morphettville was on the agenda for the filly.

The Sangster is a weight-for-age race for fillies and mares and Dean Holland has been booked for the ride at 47kg.

Holland will travel from Victoria to South Australia and start two weeks isolation on Friday to ride Away Game and the jockey will remain in Adelaide for the other feature meetings during the carnival.

While two-year-olds are seldom pitted against the older horses in feature races, Maher and his co-trainer David Eustace are not foreign to trying it having run two-year-old colt Dubious in the Group One weight-for-age Kingsford Smith Cup (1300m) in Brisbane last year.

Dubious finished fifth in the race won by The Bostonian.