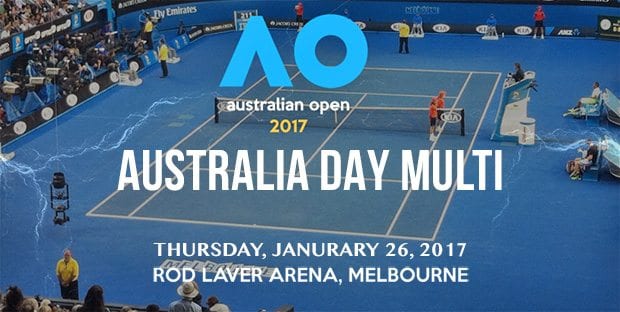 IS there anything more Australian than placing a multi on the tennis on our national day?

The tennis reaches the semi-final stage on Australia Day, and while there are no home town heroes flying the flag, we still have plenty of interest around Thursday’s action.

A pair of Americans play off on the women’s side for the right to play off for the title, while the Swiss duo of Federer and Wawrinka face off for the 22nd time in their careers for the same privilege.

It is all to play for as the tournament draws to a close.

All odds for the second of the 2017 Australian Open were provided by WilliamHill.com.au, which is running the Chase The Ace promotion right until the conclusion of the action at Melbourne Park.

William Hill has already paid over $7.6 million to their clients this Australian Open, so sign up at take advantage before the tournament ends on Sunday.

The six-time Australian Open champion Bryan brothers kick off our Australia Day tennis multi and we are expecting the boys to continue on to give title number seven a real shake.

The duo have dropped just one set this tournament and look to have recaptured their very best form after a lacklustre two year period.

The Bryan’s have the experience over the Spaniard pair of Carreno Busta and Garcia-Lopez and we are backing the Bryans to get the job done to start our multi off on the right foot.

Bob and Mike Bryan to win $1.40 via WilliamHill.com.au

Second leg of our Thursday multi is another doubles match as Caroline Garcia and Kristina Mladenovic face off against Andrea Hlavackova and Shuai Peng.

Both pairs of women have played sparkling tennis up until this point, and both have legitimate claims to advance past each other given the quality of play they have displayed thus far.

For us though, experience matters. That’s why we are favouring Caroline Garcia and Kristina Mladenovic.

Andrea Hlavackova and Shuai Peng have only played 11 professional games together while their opponents have played just shy of five times the amount of tennis as a pairing. On the doubles court it counts for everything.

Caroline Garcia and Kristina Mladenovic to win $1.50 via WilliamHill.com.au

Two Americans at very different stages of their careers meet in the semi-finals of the Australian Open as tour veteran Venus Williams plays white-hot Coco Vandeweghe.

Neither woman has dropped a set up until this stage of the tournament and could potentially go on to win the trophy.

The pair have met just once on the WTA Tour, which Venus Williams took out in straight sets against her Thursday opponent and we are backing the experience of the seven-time grand slam champion to nullify the exuberance and swagger of Vandeweghe on the big stage.

Venus Williams to win $2.35 via WilliamHill.com.au

It is an all-Swiss semi-final for the final leg of our Thursday tennis multi as former Australian Open champions Roger Federer and Stan Wawrinka lock horns on Rod Laver Arena.

Stan Wawrinka did not have it all his own way against enigmatic Frenchman Jo-Wilfried Tsonga but still advanced through without dropping a set. After surviving a tense tie-break in the first set the man they call the ‘Stanimal’ dominated the contest.

It is not unusual to see that Roger Federer has the wood over an opponent in the head-to-head standings, but his record over his compatriot is truly imposing.

Federer has won 18 of 21 matches against Wawrinka over the course of his career, including five of the last six meetings. Stan Wawrinka has never beaten Federer on any surface other than clay.

Thankfully for the Fed he will be on the hardcourt of Rod Laver Arena on Australia Day and we are backing the Swiss maestro to bring our multi home.

Roger Federer to win $1.73 via WilliamHill.com.au