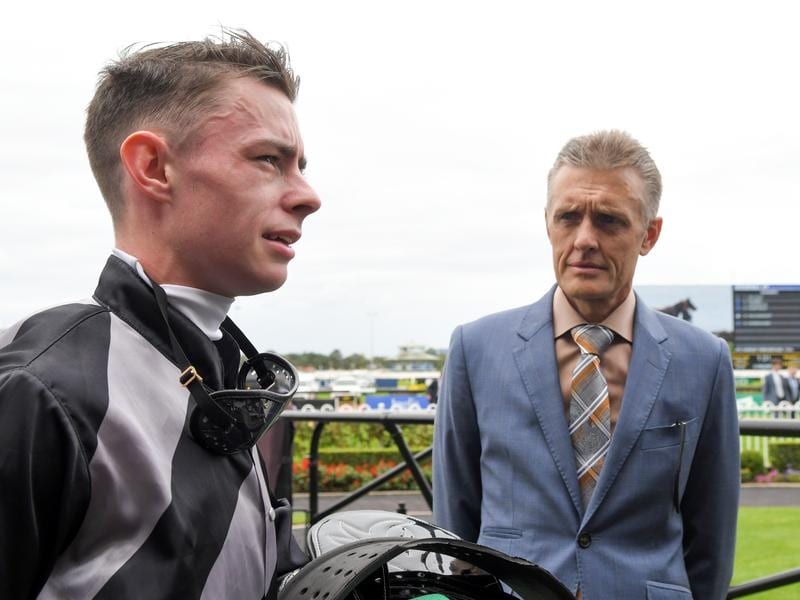 Sherry, who hails from Ireland, has ridden 93 winners in NSW this season in the country and provincial areas and is scheduled to make the step up at Saturday’s Randwick meeting on the Kensington track.

Another Newnham stable apprentice, Robbie Dolan, is set to clinch his second-straight Sydney apprentices’ premiership this season before becoming a senior rider.

Newnham said it had been the plan for Sherry to be riding in town from the beginning of the upcoming season.

“I thought I’d give him a bit of a head start so he can hit the ground running into the new season which hopefully will lead to something similar to what Robbie Dolan has done the previous two seasons,” Newnham said.

“He (Sherry) has ridden 93 winners this season which is a big achievement considering he didn’t start until October.

“It’s come very quickly but he’s a good rider, he’s got good talent and now he’s had a bit of experience and he’s nearly through his provincial claim. It’s a good opportunity to get going in town with his three-kilo claim.”

Newnham has deliberately held Sherry back from heading to town until now but believes the apprentice is ready having outridden his country claim and almost outridden his provincial allowance.

“I’m a big believer in them going through their claim in stages and not exposing them in town too soon because the idea is to make them good jockeys, not just good apprentices,” Newnham said.

“You see a lot of apprentices fall by the wayside by coming to town too soon and they’re not equipped to make the adjustment.

“They waste their claim and all of a sudden they’ve got two years left of their time and they’re down to a 1.5kg claim and they’re not experienced enough to compete at that level with the likes of James McDonald, Hugh Bowman and the leading jockeys in Sydney.”

Sherry is booked to ride the Newnham-trained Black Magnum who resumes from a let-up in the TAB Live Vision Handicap (1000m), while the apprentice also has four rides for other trainers at the meeting.

“I wanted to put him on Black Magnum,” Newnham said.

“He’s a nice horse for him to be a good chance of winning on.”