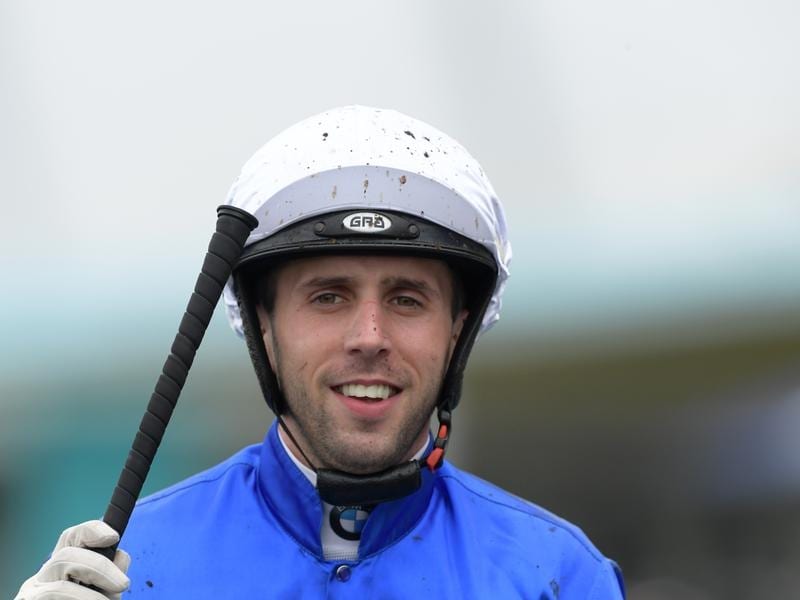 Brenton Avdulla already has a Golden Slipper trophy and has tested one of his prospects for a second, Godolphin filly Amercement, winner of the Widden Stakes.

A little battered and bruised after 2018 Slipper winner Estijaab tossed him in a barrier trial early in the week, Avdulla had to use his strength to get Amercement home in a tight finish to Saturday’s 1100m-Group Three race.

Powering home from the back of the field, Amercement ($5) got the nod over Rotator ($18) by a half head with Blazing Miss ($8) another half neck third.

“I’ve got a huge bruise on my thigh and also hurt my ribs,” Avdulla said.

“But I feel OK and it’s great to ride a filly like this to win.”

Trainer James Cummings said Amercement, who was fourth on debut in the Gimcrack Stakes in September, was improving all the time

“She is a beautiful filly with the advantage of a preparation under her belt,” Cummings said.

“Things didn’t go quite to plan in the Gimcrack. She got knocked over at the start and was left with a lot to do.

“She was left with a lot left to do again today but with more strength on her side, she savaged the line and is an exciting filly.

“While she is still doing a few things wrong she can keep improving and be a little more switched on when the races get harder.

“She definitely gives the impression that once she steps up to six furlongs (1200m) she will be more tractable. A race like the Sweet Embrace would be suitable.”

The Sweet Embrace is one of the main lead-up races to the Slipper on March 23.

Amercement firmed from $51 to $26 for the $3.5 million Golden Slipper after her win with her stablemate Tassort the $4.50 favourite.

Overreach (2013) and Mossfun (2014) are the last two fillies to go on to win the Slipper after claiming the Widden.