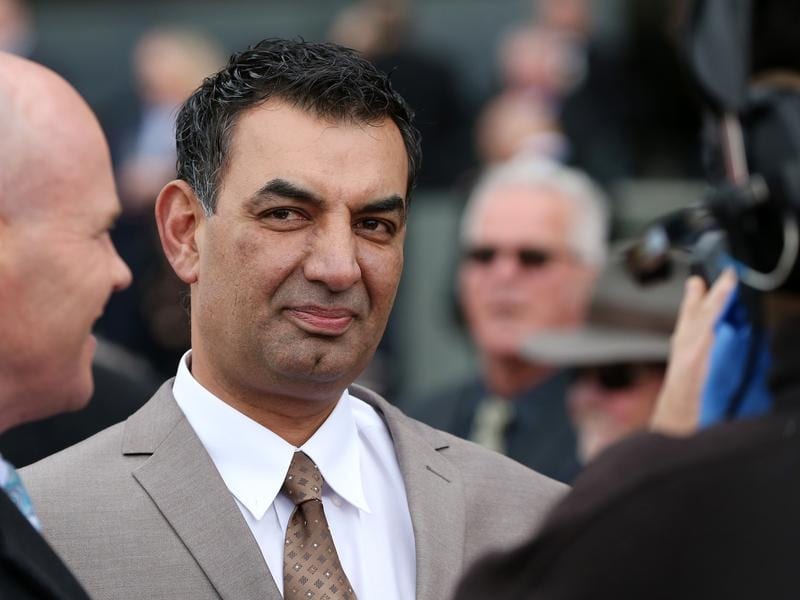 Trope will make his debut for new trainer Julius Sandhu in the Aurie’s Star Stakes at Flemington.

Trainer Julius Sandhu will use the Group Three Aurie’s Star Stakes at Flemington as a litmus test for his enigmatic stable recruit Trope.

Sandhu, who has been training for only two years, is hoping the five-year-old can confirm his belief that he is a genuine Group One sprinter.

Sandhu trains for Lofty Thoroughbreds, which purchased the former Team Hawkes-trained galloper for $245,000 at an Inglis online auction in March.

Lofty Thoroughbreds’ manager Paul Lofitis said at the time that he bought the son of More Than Ready with the goal to stand him as a stallion.

Trope won his debut on the Kensington track last year then competed at stakes level in his subsequent eight starts.

He recorded four seconds, including in the Group Three Show County Quality at Randwick and the Group Two Theo Marks Stakes at Rosehill.

He then finished ninth in the Group One Manikato Stakes before he was spelled.

He came back in the autumn and was down the track in both the Oakleigh Plate and Newmarket Handicap before being sold.

“I couldn’t believe it when Paul offered him to me to train,” Sandhu said.

“It’s a great opportunity for me to have a horse who can compete at the highest level so early in my career.

“Paul wanted a horse which could run in big races in the spring. Trope has a rating of 97 so he’s qualified for them and he’s shown with a second at Group Two level that he can mix it with the best.”

Sandhu has trained six city winners but has not had a victory at Flemington.

He says the two races he is aiming Trope towards are the Manikato Stakes and VRC Sprint Classic, the latter run over the same course and distance as Saturday’s Aurie’s Star.

“I’ll learn something about the horse, I’ll find out whether he can handle the straight and the class. Hopefully he’ll tick both boxes,” Sandhu said.

“I’m very pleased where he’s at. He’s had a relatively uninterrupted campaign. He’s had two jump outs and he’s travelled each time on wet tracks.

“Flemington is a soft six but with the weather predicted it should be a soft seven at best which I think will suit him.”