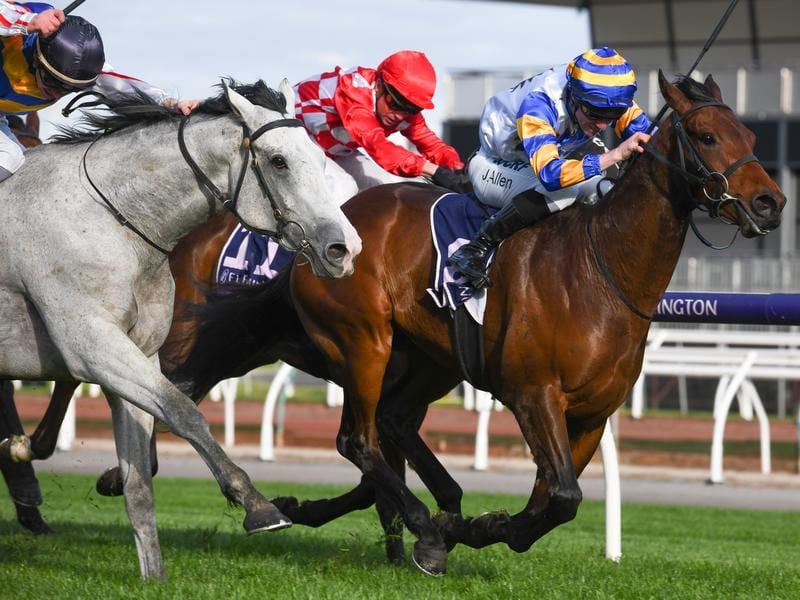 Jockey John Allen knows what it takes to win a Victoria Derby and says Adelaide Ace has the attributes to succeed in the classic.

Allen won the Derby in 2018 on the Darren Weir-trained Extra Brut and partnered Adelaide Ace to victory in the Victoria Derby Trial at Flemington on Wednesday.

Adelaide Ace is prepared by Lindsey Smith, who won the Derby with Plastered in 2004, and after starting his campaign in Perth is now prepared from the trainer’s secondary base at Warrnambool.

Allen said there were similarities between Extra Brut, now racing in Hong Kong, and Adelaide Ace.

“He’s got a great attitude which will help him,” Allen said of Adelaide Ace.

“Extra Brut might have been a bit wider than this bloke but they both move very similar and they both have similar attributes.

“Hopefully he can press on to the Derby.”

Smith said the similarities between Plastered and Adelaide were few and far between saying his former winner was “about eight hands taller” than Adelaide Ace.

Adelaide Ace’s campaign has been geared towards the Derby since joining Smith’s stable.

“He came over from Perth with this time of year in mind,” Smith said.

“He’s not very big but I worked him through the heavy sand back home and that helped him get to the line today.

“His coat’s not quite right yet so there’s improvement to come but we’ve got past the first hurdle.

“The jockey was quite keen to ride him after his trial at Ararat so that was quite pleasing.”

Smith is unsure which path he will take towards the Derby, saying he does not want to look too far ahead because it can lead to disappointment.

“I’ll sit down with the owner tonight and see which way he wants to go,” Smith said.

Smith was taken with the performance of fifth-placed Olympic Oath, who is also Derby-bound.

“He’s a big bowling, goofy sort of horse and I thought his run wasn’t too bad,” Smith said.