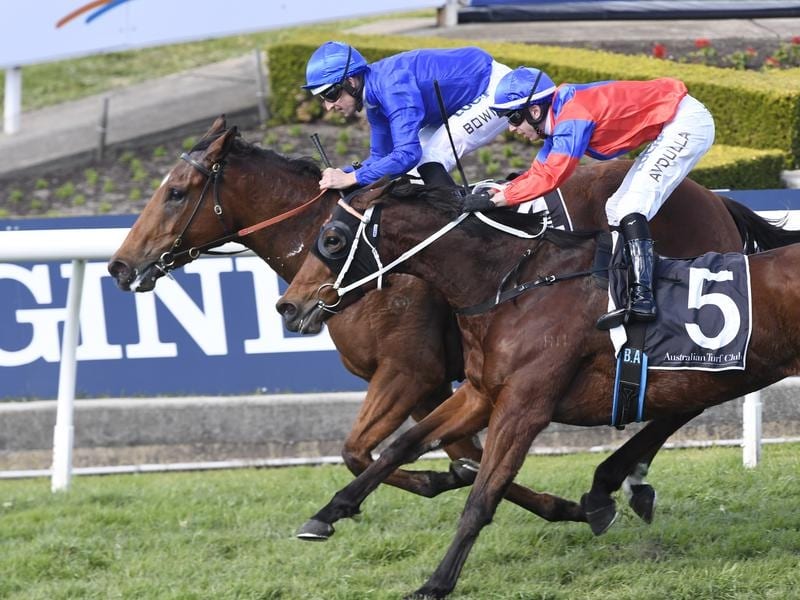 Alizee (left) has made a winning return to racing, beating Invincible Gem in the Missile Stakes.

Short-priced favourite Alizee has duly won the Group Two Missile Stakes but not quite as easily as might have been expected.

Sent out at $1.30 in Saturday’s five-horse field, Alizee strode to the lead rounding the turn and looked to be cruising to a comprehensive victory in the 1200m-race.

Invincible Gem ($17), winner of the race two years ago, made it interesting in the final 200m when she launched a challenge and cut the margin to a short neck.

While Hugh Bowman appeared he may have relaxed a little bit more than punters would have liked, Alizee had the race in hand.

“I thought for two strides I had Alizee but she’s top shelf and did what she had to do,” Invincible Gem’s jockey Brenton Avdulla said.

Alizee’s trainer James Cummings was happy to see the triple Group One winner do what he expected.

“She’s an outstanding horse and we are lucky enough to have her in the barn,” he said.

“I’m really pleased for her that she’s come back in such good form.”

Cummings said they had changed a few pre-race habits with the highly strung mare.

“We are treating her more like a normal horse,” he said.

“We tried her without the pony today and she was quicker out on to the track.”

Spring plans remain fluid for Alizee who is in the mix for the $14 million Everest, either as Godolphin’s runner or to occupy another slot.

Bowman said the pace of the race went against Alizee.

“We knew she’d come back well. It was a slowly run race which didn’t suit but she was able to overcome it and is only going to improve from the run.” he said.

Le Romain, Dissolute and Vegadaze filled the positions behind Alizee.