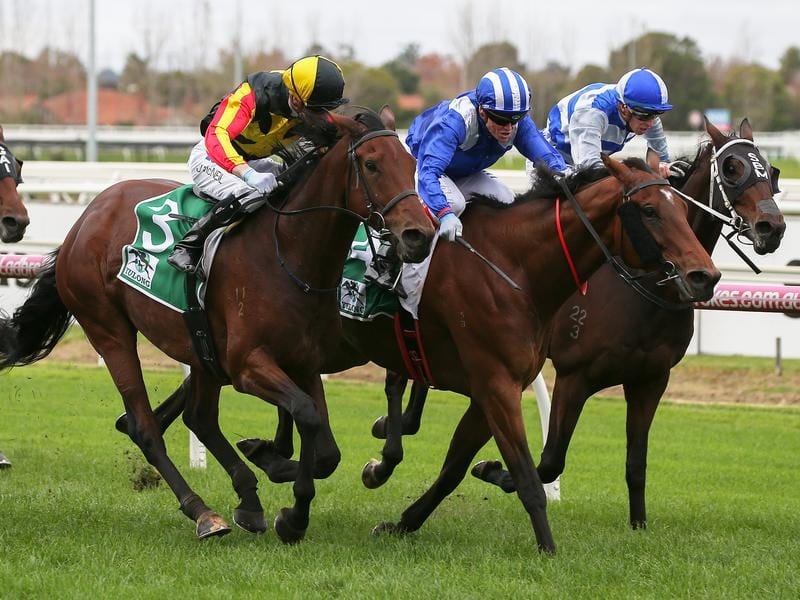 Import Alfarris (centre) makes his return at The Valley as a stepping stone towards longer targets.

The path towards spring staying races begins for import Alfarris and his Lindsay Park co-trainer Tom Dabernig admits he is still unsure what level the gelding can reach this campaign.

Alfarris did his early racing in England before joining the Lindsay Park stable ahead of an autumn campaign this year.

The now six-year-old gelding notched his first Australian victory at his third local appearance in a 2406m handicap at Caulfield in May before running in The Andrew Ramsden (2800m) at Flemington later that month.

The Andrew Ramsden carried a free ticket into this year’s Melbourne Cup for the winner, with Steel Prince clinching that with his victory while Alfarris was beaten 2-1/2-lengths into fourth.

Alfarris returns to racing in Saturday’s Ladbrokes Handicap over 1600m on a path to races over further distances.

“He looks great coming out of winter,” Dabernig said.

“He stayed in work after the Andrew Ramsden but had an easy time.”

Dabernig said 1600m was clearly short of Alfarris’ best distance, but the race was a stepping stone to getting up to 2000m at his next start.

“I think there’s a 2000-metre race coming up and then that leads into a 2500-metre race at Flemington in September,” Dabernig said.

“At the moment he’s rated in the nineties (93) and we’re trying to get that rating up to see where he can get to in the spring.”

Whether that is feature races or some of the lucrative country Cups remains to be seen, but Dabernig indicated The Bart Cummings (2500m) at Flemington, which also carries a Melbourne Cup ballot exemption, in early October was a race on the radar.

“That’s what we are thinking,” he said.

“He’s a lovely sound horse and a good-natured horse.

“I thought his runs last preparation, he kept improving.

“It will be interesting to see how the Andrew Ramsden form holds up.”