THE 12th A-League grand final is set to be a massive affair between the top two teams Sydney FC and Melbourne Victory, but will it stack up to some of the greatest of all time? 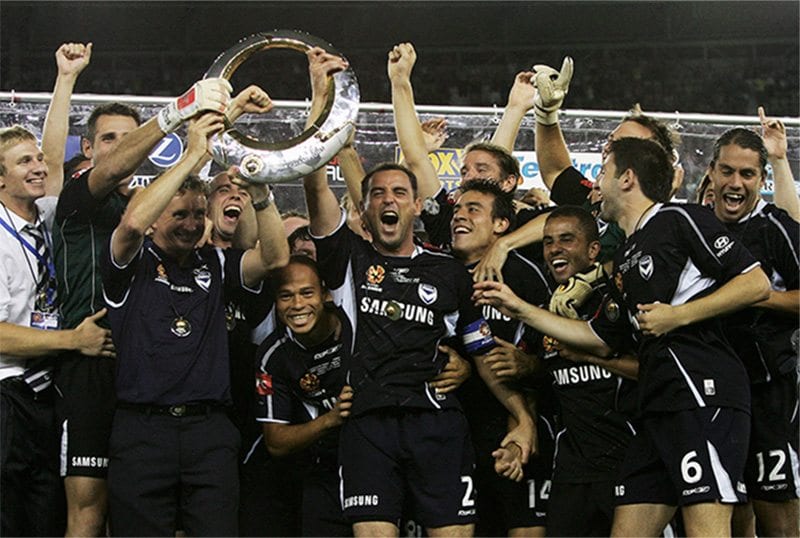 Here are our picks for the five best contests on the last day of the season.

The Melbourne Victory striker put Adelaide United to the sword, bagging a ridiculous five goals to put his historic stamp on the competition.

It took 20 minutes for Thompson to register his first but by half time he had his hat trick and was begging for more after the break.

It only took 11 minutes and he was at it again, with his last coming in the 72nd minute.

With the game all but over, substitute Christian Sarkies rubbed salt into the wound with an injury time goal that made it 6-0.

Thompson’s haul was the largest in A-League history, as was the 6-0 result in a grand final, with the stellar performance by the Victory side still among the best ever seen on an Australian pitch.

Steve Corica will always be the first man to score in an A-League grand final.

After the competition’s inaugural season in 2006, the new league had its showcase event.

And it didn’t disappoint.

While the goals failed to flow, the action left plenty of fans, both hardcore and casual on the edge of their seats and laid a foundation for future triumphs.

Premier League legend Dwight Yorke was the marquee man in the inaugural season and he would leave his seal on the competition with a deft pass to Corica, who made no mistake for Sydney FC in the 62nd minute, giving the Sky Blues a 1-0 win an the first ever A-League title.

In one of the most controversial matches in A-League history, legendary striker Besart Berisha announced himself to the world with a stunning brace that ripped the heart out of Perth Glory.

After fighting our a scoreless first 45, disaster struck early after the break for the favoured Roar when defender Ivan Frantic – now at Melbourne City – turned one into his own net to give the Glory a 1-0 lead.

And, despite controlling the whole match, it just was not happening for the Roar and it look like they would surrender the title as a certainty beaten.

But they forgot about Berisha.

The superstar import, who would later go on to star for Melbourne Victory, took the bull by the horns and sent an unstoppable header into the Perth net that looked likely to force extra time.

Of course, the Roar had other ideas and after Dean Heffernan was given his marching orders for a reckless tackle on Frantic in the 90th minute, Roar flocked forward in droves.

Liam Miller then became famous for all the wrong reasons when he brought down Berisha in the box and conceded a penalty, although many argued that the force was not sufficient enough for a penalty.

The arguments matter little, though, the scoresheet says Berisha scored the penalty and the Roar became the A-League’s first back to back premiers.

Might just have been number one if these two teams were Melbourne Victory and Sydney FC. But so it was, the historically good Brisbane Roar up against the marauding Central Coast Mariners.

A dour 90 minutes struggle could not split them, with neither side able to find the back of the net.

But playing a full game of staunch football can take a lot out of you and, as both sides tired, the attackers began to find something.

Centre forward Adam Kwasnik was the first to find the back of the net, his goal for Central Coast breaking the deadlock in the 96th minute.

But that was just the start of the fireworks.

A young Oliver Botanic – now at Victory – scored again for the Mariners and they looked home.
But the Roar had other ideas.

With time winding down, they threw caution to the wind and found a goal through Brazilian attacking substitute Henrique.
Moments later, midfielder Erik Paartalu somehow scored with virtually the last play of the match, forcing penalties.

The Roar rode that momentum into the penalty shootout and were duly awarded the A-League title.

There could only be one grand final that tops all others and 2010’s heart stopping big blue is that game.

A clash between the top two teams in the A-League, underpinned by the bitter north south rivalry that threatened to boil over across two semi final bouts.

With grand final specialist Archie Thompson forced off with a leg injury just 15 minutes in, this match became a war of attrition that neither side could break the back of.

After 63 scoreless minutes, including a controversial disallowed goal to Victory cult figure Rodrigo Vargas, the Sky Blues found the back of the net thanks to the dependable Mark Bridge and then all hell broke loose.

Searching for the equaliser, Victory flocked forward in droves and, finally, a late header from Adrian Leijer from a Kevin Muscat set piece squared things up in the 81st minute. A dour struggle resulted in extra time and, with few opportunities generated, spot kicks would decide the winner.

And, much to the chagrin of the Melbourne Victory faithful, it would be the Sky Blues who would emerge victorious, 4-2, with hard man Muscat famously missing the opening penalty.