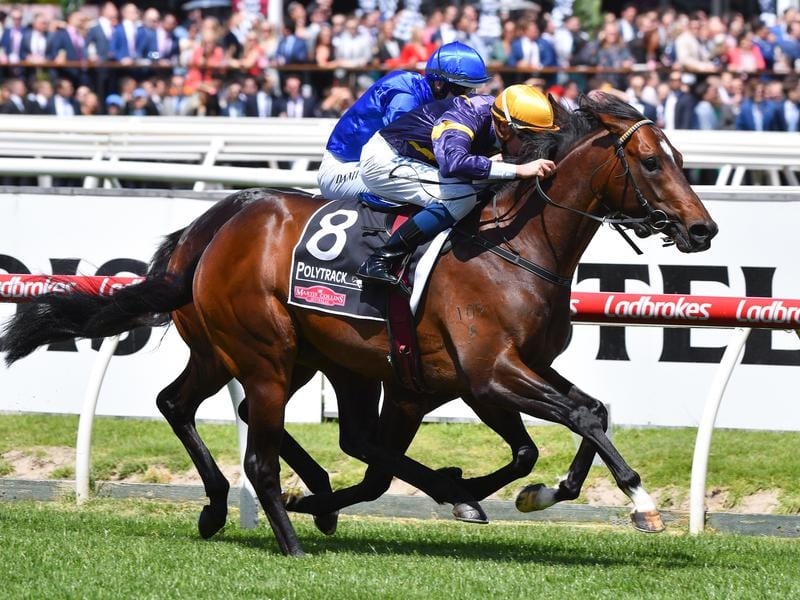 Alabama Express has taken a major step towards fulfilling his promise in winning the Gothic Stakes.

Niggling problems have plagued the career of Alabama Express but his trainer expects the three-year-old to reach the potential he has shown after a fighting win at Caulfield.

Trainer Mike Moroney held major spring aspirations for Alabama Express who had his season return delayed by surgery to a hind leg and further delayed recovering from an elevated temperature.

Providing Michael Dee the second leg of a race-to-race double, Alabama Express ($8) defeated the $3.40 favourite Hilo by a head with Heirborn ($7) 1-1/2 lengths away third.

Moroney said he went into Saturday’s race confident Saturday’s 1400m would be ideal after the colt had no luck when fifth at Moonee Valley over 1200m on September 27.

“We really thought he was going to be good enough to go to Queensland and have a go at the Group One two-year-old races, but we had to stop and do an operation on him on a hock,” Moroney said.

“For that reason it took a while before we could get him back and then he got a temperature.

“Things were going wrong with him and we had to rush him and then he didn’t quite get the right draws in races, but we always thought he was group class.”

Moroney said Alabama Express would head to the Carbine Club Stakes (1600m) at Flemington on November 2 and the Sandown Guineas a fortnight later.

“He’s a really nice colt, a gorgeous type of horse.”