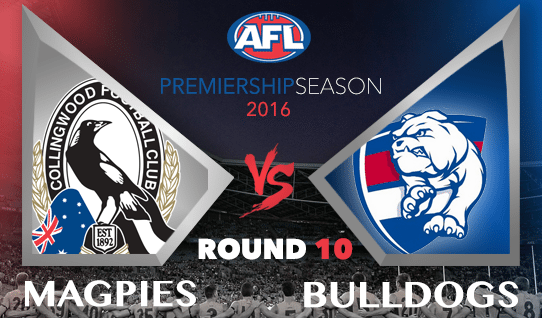 Sunday, May 29 from 3.20pm at the Melbourne Cricket Ground, Melbourne – watch on Channel 7, Fox Footy

COLLINGWOOD host the Western Bulldogs on Sunday afternoon in a clash that has serious finals implications for both teams.

The Magpies are currently a $6 chance at Sportsbet.com.au to make the finals in 2016, and if they go down against the Dogs on Sunday you can expect to see those odds to balloon into double figures.

The Western Bulldogs remain in striking distance of a top-four finish, but they can kiss a double chance goodbye if they fail to beat sides that are positioned outside the top-eight.

The Bulldogs are $6 outsiders at Sportsbet.com.au to finish inside the top-four this season.

The Dogs have had the wood over the Woods in recent times; winning the last two match-ups between the two sides.

Sunday will be the first time the two teams have met on the MCG since round 6, 2011.

Enough about the teams though, we are only concerned about the individual participants in this article.

We took a look at the player markets for Sunday afternoon’s clash and select the best bets in both the first goal-scorer and the disposal markets.

All odds this week are provided by Sportsbet.com.au, which is offering a great incentive for punters who do not yet have an account with Australia’s favourite online bookmaker.

Open a new account at Sportbet and you have the option to get your first bet matched up to the value of $501.

Who would have thought at the beginning of the season that an American collegiate athlete who had not even seen a Sherrin two years ago would ever be our selection to kick the first goal in an AFL match?

The 211cm American Mason Cox has been a reliable scoring source this season for Magpie coach Nathan Buckley, kicking nine goals from his five appearances at senior level.

Cox has an incredible ability to take contested marks, and when you combine that with his colossal height, he is a nightmare match-up for even the most seasoned defenders.

The 25-year-old has managed to boot the opening goal twice this season already – against Essendon and Brisbane – and given the Western Bulldogs dearth of tall key position players, we are backing the American Pie to nail the first major on Sunday afternoon.

How could we go past the package?

The Dog’s most dangerous forward has reached dizzying heights this season to go along with a few quiet performances – but the aggressive Dog has a penchant for the big stage.

Stringer booted five goals last time the Western Bulldogs played at the Melbourne Cricket Ground, and he has averaged over two goals a game across the entirety of the 2016 season.

The 22-year-old is one of the most explosive players in the league and the Pies have no obvious match-up to quell the 2015 All-Australian representative.

We are backing Stringer to boot the first against the Pies on Sunday afternoon at the G.

Smooth-moving Collingwood midfielder Steele Sidebottom is our 30 or more selection for the Pies.

The man they call Rusty has been at his prolific best in season 2016, averaging 29 touches per game since round 5 and in his last two matches he has surpassed 30 possessions on both occasions.

Surprisingly the 25-year-old has only played the Western Bulldogs once since 2013, amassing 33 disposals back in 2015, but that should not be a problem for the hard-working on-baller.

We are backing the classy Sidebottom to exceed 30 disposals on Sunday afternoon and generate us some cash at odds.

Steele Sidebottom to get 30 or more disposals: $2.20 @ Sportsbet.com.au

Western Bulldogs livewire Luke Dahlhaus is our best bet to get 30 or more touches at the G this Sunday.

Over the past month the 23-year-old has averaged 29 disposals, and twice this season in the big matches he has topped 30 touches – against the Crows and the Hawks.

We are expecting the ‘Dal to be at his prolific best at the home of football on Sunday.

Like our first goal scorer selections for Sunday’s match?

If so, we suggest heading over to Sportsbet.com.au and take advantage of their first goal scorer promotion this Sunday afternoon.

Place a first goal scorer bet on the Collingwood vs. Western Bulldogs match this Sunday and if your player fails to boot the first major of the game but kicks the first of any other quarter you get cash back up to the value of $50.