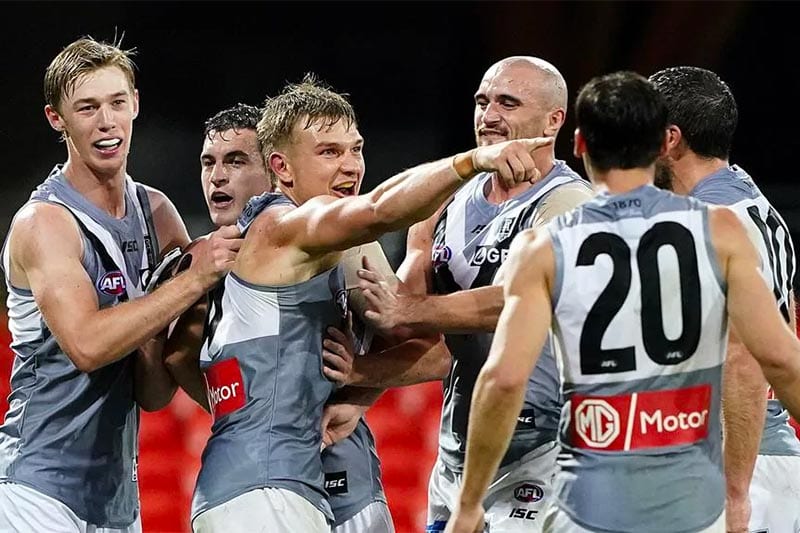 The final round of the 2020 AFL Premiership season did not disappoint, as the best teams flexed their muscles and the finals order was not settled until the closing match. Here are the highlights from round 18 and the major talking points heading into the postseason.

Saints and Bulldogs thrive under pressure

You couldn’t fault the St Kilda Saints in their big win over the GWS Giants, as they out the game extremely well with seven goals to nil in the second half.

The win secured the Saints’ position in the top eight, meaning fans of the club will get to enjoy finals footy for the time since 2011.

Even though Michael Walters and Matthew Taberner were late omissions for the Fremantle Dockers, they kept up with the Western Bulldogs until the last quarter.

An emphatic performance from Lachie Hunter helped the Dogs get over the line and lock them into the finals, where they will face St Kilda in the opening week.

The venue for the match is yet to be decided, but the Saints will make a decision during the week because they sit higher in sixth position.

The Port Adelaide Power stayed strong under pressure on Monday night as they locked in the club’s fourth minor premiership since joining the competition in 1997.

The Collingwood midfielders battled hard but lacked composure going forward, as Port Adelaide’s intensity around the ball caused a number timely turnovers in the Magpies’ back half.

Even though Charlie Dixon was kept quiet by Jordan Roughead, the Power found other avenues to goal in Brad Ebert and Steven Motlop, who slotted two apiece.

The result had a significant impact on the finals fixtures, as Port will now face the Cats at Adelaide Oval and the Pies will head west to tackle the Eagles at Optus Stadium.

Although the Richmond Tigers were coming up against the 18th-placed Adelaide Crows, the pressure was on early as the bottom side went in search of a fourth consecutive win.

Tom Lynch sat out the match with a hamstring injury, but that didn’t stop the reigning premiers from kicking a winning score.

Nine individual goalkickers stood up for the Tigers in Lynch’s absence, with Jack Riewoldt, Josh Caddy and Jake Aarts all kicking two each.

Four players kicked multiple goals for the Brisbane Lions in their win over Carlton, yet only two of them are full-time forwards.

Daniel Rich and Mitch Robinson were the unlikely heroes for the Lions, who were put under the pump early by a Blues side playing for pride.

The Lions and Tigers will face off at the Gabba, with the winner advancing straight to the preliminary finals and the loser taking on either St Kilda or the Western Bulldogs in the semis.

Retiring legends go out with a bang

A number of players made the tough decision to hang up the boots at the end of this season, and a few of them signed off in style.

Hawthorn premiership stars Ben Stratton and Paul Puopolo were crucial to the Hawks’ win over the Suns, both putting in powerful performances in their final games.

Puopolo was electric in the forward half and finished with three goals to his name, while Stratton swung forward late in the game and kicked his second career goal, 10 years after his first.

Kade Simpson has been the heart and soul of the Blues through many difficult years, and he went out on a high note with 19 touches and a goal against the Lions.

All three of these players were one-club men who led by example on and off the field, and we thank them for their services to footy over the years.