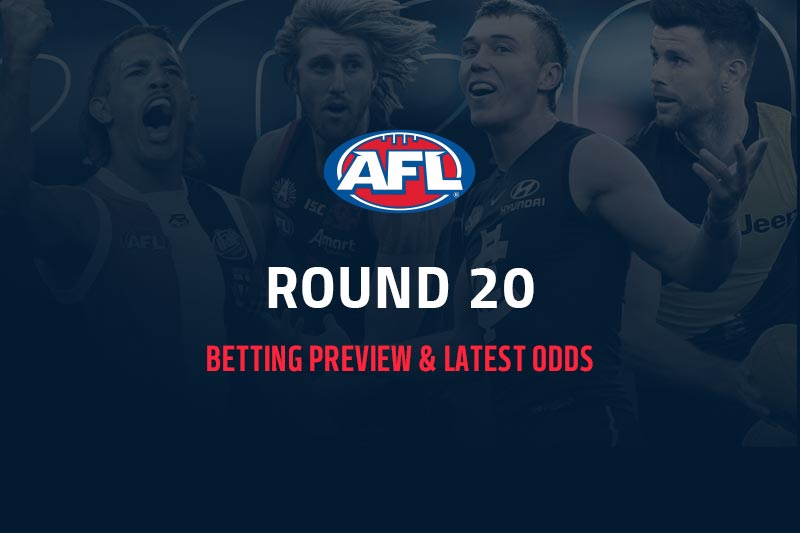 The 2021 AFL Premiership has undergone another week of fixture scrambling leading into round 20, keeping the season on track for a September finish. Here are all the matchups and betting odds for the upcoming round as well as a premiership market update courtesy of Sportsbet.

It is now or never for both St Kilda and Carlton, whose crunch clash has been moved ahead to primetime on Friday night. The Saints cannot afford to drop another game after losing to the Eagles by eight points last week, while the Blues’ loss to the Kangaroos leaves them two wins outside of the top eight. All eyes will be on Coleman Medal leader Harry McKay, who is in doubt for this game due to a toe injury.

The Crows did well to win at Marvel Stadium against the Hawks in round 19, but the short-priced Western Bulldogs can smell blood in the water this week. Online bookmakers are offering a scant $1.10 for the Doggies, who have a strong record at Ballarat’s Mars Stadium. Matt Crouch may make his long-awaited return for the Crows after missing the entire season so far with groin issues, while Laitham Vandermeer and Easton Wood will be in the mix for the Bulldogs.

As crazy as it sounds, the Kangaroos have played some great footy over the last five weeks. Although the odds heavily favour the Cats, North Melbourne could give them a run for their money at Blundstone Arena this Saturday. Tarryn Thomas was fantastic in round 19 with four goals and 23 disposals, although he suffered delayed concussion symptoms post-match and will miss this clash.

This contest between Gold Coast and Melbourne is one of two matches in round 20 without a confirmed venue, but they should be given the all-clear to play at Metricon Stadium. The Suns led the Lions at halftime last week, but they fell apart and conceded 11 consecutive goals. The Demons are only two points behind the top two, but they have only one win from their last four games and will need to lift this Saturday.

The Collingwood and West Coast rivalry continues this weekend at the MCG. Robert Harvey has lost four of five games since taking over as interim coach at the Pies, but the return of Jeremy Howe could give the side a huge boost. The Eagles lost Liam Ryan to a hamstring injury early against the Saints, which should rule out the 2020 All Australian for the next few weeks.

Lance Franklin was suspended by the Match Review Office after carelessly hitting Luke Ryan with his elbow last week, but the Swans are preparing to challenge the ban. The Bombers will be hoping that appeal fails, as Buddy has kicked more goals against the Bombers than any other team in the AFL. Expect a fiery contest at the Gabba this Saturday night, as the Dons must win to keep their finals hopes alive.

The Hawks and Lions will clash in round 20’s second match down in Tasmania, where the Lions are looking to reclaim their spot in the top four. Chris Fagan’s men have slipped in the premiership market due to their poor form, but a win away from home against the Hawks could give them a big morale boost before the finals. AFL betting sites are giving the Hawks around 30 points at the line, which is good value considering they drew with the Demons just two weeks ago.

The Giants and the Power are still waiting for the AFL to confirm a venue for their Sunday afternoon clash. With Port Adelaide sitting fourth and GWS in eighth, the outcome of this clash will have a big impact on the AFL ladder. Stephen Coniglio was a late omission against the Bombers last week, but the GWS captain should return for this important match.

The final match of round 20 will see the Dockers host the Tigers at Optus Stadium in yet another contest with finals hopes on the line. Both sides sit just outside the top eight, only half a win behind the Giants. The Dockers lost Nat Fyfe (shoulder) and Michael Walters (hamstring) against the Swans, while Alex Pearce and Sean Darcy also pulled up sore. Given those injury concerns, Richmond will start as a $1.54 favourite in Perth.

The Cats have jumped into outright premiership favouritism for the first time this season at $3.75, placing them just ahead of the $4.20 Western Bulldogs. Despite losing to the Doggies by 20 points in round 19, the Demons have held firm at $5.50. The Lions ($7.50) and Power ($9.50) have both fallen back slightly despite winning in round 19, while the Swans are into single figures at $9.50. Every team outside of the top six is now at long odds to win the flag.