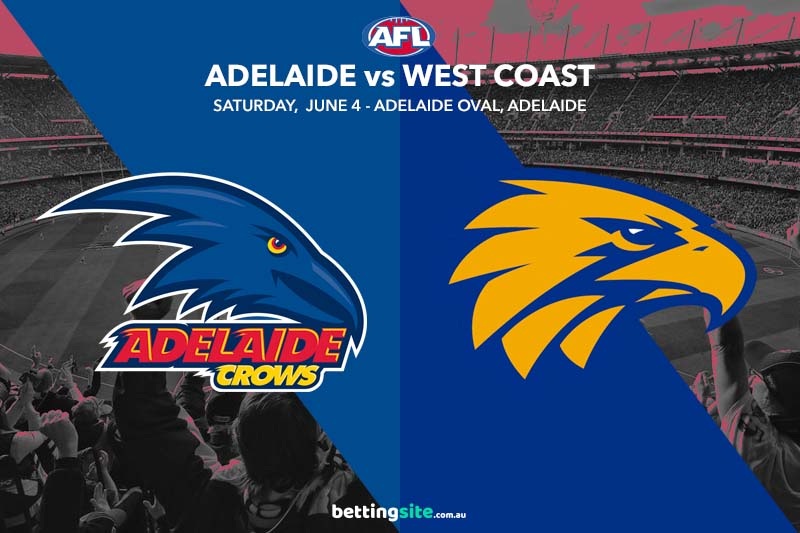 Can West Coast’s season get any worse, we’ll find out when they travel to the Adelaide Oval for a round 12 AFL clash with the Crows?

Adelaide Crows was well beaten as expected by the Cats in Geelong in round 11, but it was a commendable display, and the margin was a mere 10 points halfway through the third quarter. The class of the Cats ultimately shone through, but the Crows left with their dignity intact.

After a run of losses, the Crows will be looking at this home game as chance to secure a morale boosting victory. Adelaide has looked quite solid defensively, but their inability to kick more than 70 points has been their undoing in recent weeks. This can be attributed in breakdowns in ball movement leading to turnovers, errant goal kicking, and a lack of real-time tactical awareness. This is a commodity that can take young players years to accumulate.

West Coast Eagles’ season from hell continued in round 11 when they were thumped by 101 points, at home, by the Bulldogs. Sadly, this is not their first home loss by more than 100 points, and long-suffering fans could be forgiven for tearing up their season tickets in disgust.

It’s hard to imagine how the Eagles might suddenly show leaps in improvement, and we should continue to bet against the likely wooden-spooners at every opportunity.

The impressively named, Adelaide midfielder, Jackson Hately has caught our eye several times this season and looked very good against the Cats. Just 21-years-old, Hately is tall for a mid at 191cm, but he knows how to find the ball and impact the play. He grabbed 27 disposals in round 11 while laying 8 tackles and is a rising star to watch. The Crows have been patient with the youngster, and it was just Hately’s sixth game for 2022.

We will match Hately up with the West Coast midfield boss Tim Kelly. Built much lower to the ground, Kelly is a more traditional in-and-under type of mid, but it will be interesting to see if Hately can use his 8cm height advantage to mark over Kelly’s head. Kelly grabbed 38 possessions in round 11 and booted 1 goal and was one a few West Coast players who turned up to play against the Dogs.

Adelaide is short here, as you might expect, with the early line set at around 37.5 points. Coming off an encouraging effort against the Cats, we are obliged to take this bet with high confidence. For those worried about the Crow’s ability to kick a sizeable total, we recommend taking the unders on the total points line, which sits at 149.5. It may be a slopping, low scoring affair, so this would be our secondary suggestion. We are happy to take Adelaide -37.5 and trust they clean up their attacking errors against inferior opposition.

For the eternal value-junkies, we will string together some likely same game outcomes and hope our crystal ball is on point. Adelaide -37.5, into James Rowe anytime goal kicker, into Jackson Hately 20+ disposals. This three-legged attack will return $3.64 courtesy of Ladbrokes.