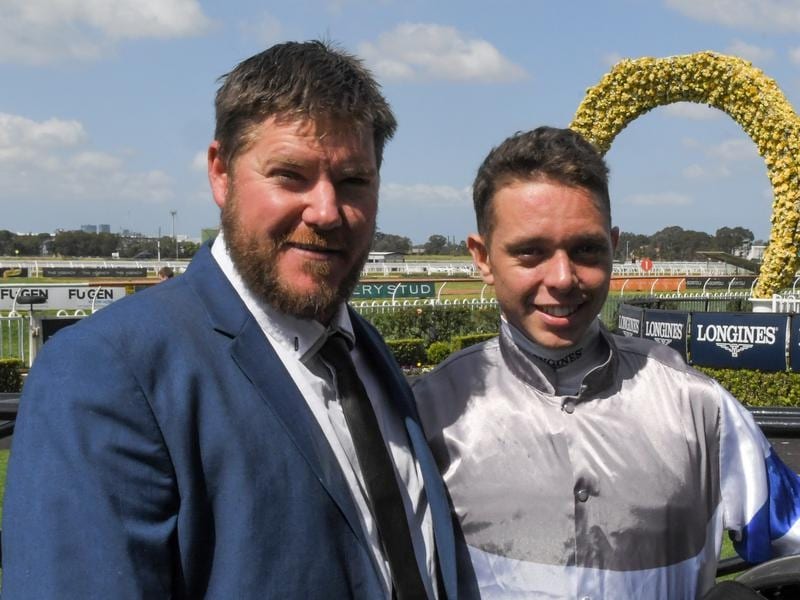 Trainer Colt Prosser and jockey Andrew Adkins have combined for a Rosehill win with Haames.

Andrew Adkins has celebrated his first win since returning from an injury-enforced layoff and significantly it has come aboard the Colt Prosser-trained Haames in the Highway Handicap.

Adkins was badly injured when he fell from War Baron in the Fernhill Handicap in April and spent several months recovering, only returning to the saddle a couple of weeks ago.

Ironcially, War Baron posted his first win during the week at Hawkesbury and Adkins wasted no time getting on the board at Rosehill on Saturday, taking out the opening race for Prosser, who Adkins has known since birth.

“Andrew is a great little rider and I had no worries putting him on. I’m so glad he can come back and ride a winner, especially for me.

“This can go up on the wall and his dad will be very proud.”

Haames ($31) had resumed with an unplaced run at Taree last month and Prosser expected him to need the outing on Saturday.

But after Adkins let him find his feet early, the horse was able to weave a passage through the field and burst through towards the inside to beat a courageous Storm Attack ($11) by a nose with leader Poor Corner ($81) holding third another long neck away.

Adkins was thrilled to get the result on Haames, who he had ridden in the past without luck.

It’s really nice to win on that horse, the last time I rode him I never actually moved on him in the straight so it was good to let his head go and see what he does have in the tank,” Adkins said.

“He bounced out and was really strong and keen through the middle stages and I thought, ‘geez, I’m going to be a chance here’ but the only thing was, Colt did say to me he’s second up and he didn’t have a pure run first-up, so he might just be looking for.

“I opted to ride him for a bit of luck and it paid off.”

Haames will be set on a country Cups path with the Coonabarabran Cup among his major goals.

Gem Dealer was an easy favourite and never raised the hopes of his supporters, finishing down the track.