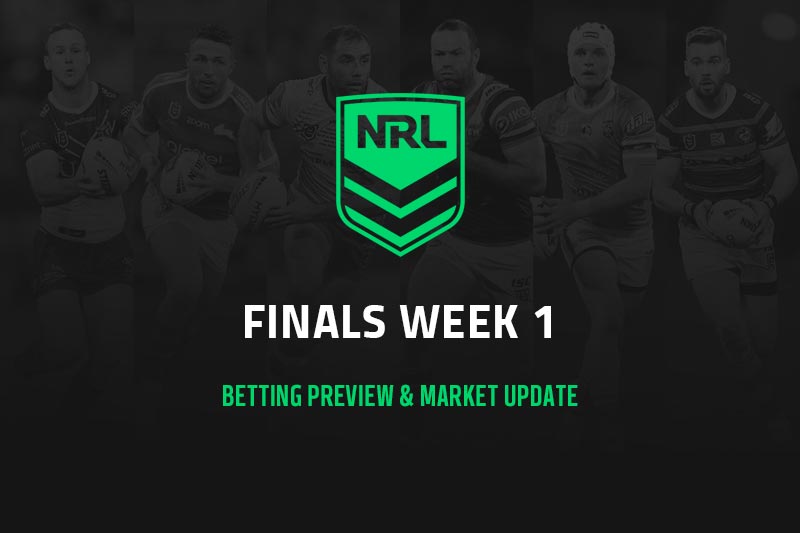 The business end of the 2021 NRL season has finally arrived after 25 rounds which saw point-scoring records smashed, but now the focus turns to defence as we enter Week 1 of the finals.

The top six teams set the standard early on and – for the most part – made light work of those below them, but eighth spot wasn’t resolved until the second-last game of the regular season.

Melbourne, Penrith, South Sydney, Manly, Sydney and Parramatta look all but certain to move into week two of the 2021 NRL Finals Series, but is there a precedent where the lower seeds in Newcastle and the Gold Coast can upset the apple cart?

Newcastle themselves made the preliminary finals in 2013 from seventh place, while Canterbury a year later went all the way to the NRL Grand Final from the same position.

The Cowboys in 2017 famously were at the pub on the final Sunday afternoon to commiserate the end of the season, and it took just one result to change their fate. Three weeks later they made it to the big dance after winning three straight finals games on the road.

The famous run by Parramatta to the 2009 NRL Grand Final came from eighth spot, and they ended up losing to a team who later had the title stripped due to salary cap breaches.

Even South Sydney from sixth last season narrowly missed out on beating Penrith despite both teams scoring three tries each in a thrilling prelim.

While many would argue this year’s Knights and Titans are the two worst teams to have ever made an eight-team finals series, the point is that more often than not there is a spanner thrown into the works.

Let’s take a look at what should be an awesome first week of finals footy.

It is one of the genuine rivalries that still remains in the NRL and this contest promises to be a belter from the moment it kicks off.

The Melbourne Storm might be the $1.42 favourite, but Cameron Munster and Josh Addo-Carr will be racing the clock to recover from injury and take their place on the field. If both are ruled out, it could see the market shift in favour of Manly, who come in as a $3 outsider.

The Manly Sea Eagles started the season so dreadfully that their coach Des Hasler was on the hot-seat and some were even calling them the worst team in the club’s history. Since the start of April, they won 16 of their final 20 games to become a genuine threat to the NRL Premiership, largely on the back of Tom Trbojevic, who looks a certainty to win the Dally M Medal when it is announced later this month.

Manly have had youngsters like Haumole Olakau’atu, Morgan Harper, Jason Saab and Josh Schuster rise to prominence also, and Reuben Garrick on the left wing just set the individual point-scoring record for a regular season. They have plenty going for them and it wasn’t that long ago they pushed Melbourne for long periods of their game, and you know Hasler will have learnt a ton from that experience.

If the Storm are without Munster, the +8.5 at the line for the Sea Eagles is tremendous value. Even if Munster does play, the game will be close but the edge would still lie with Melbourne, who have just won their fourth minor premiership in six seasons.

If there has been a more unusual matchup for a finals game, we are yet to see it.

The Sydney Roosters have endured the most crippling injury toll a team has ever seen, capped off by the immediate retirements of Jake Friend, Brett Morris and Boyd Cordner. Two weeks ago they didn’t even have enough players available to name a full squad of 21, but they ended up dishing out a hiding later that week anyway. Everyone is just waiting for them to fall over, but they kept on punching above their weight to finish tied for fourth and only put down to fifth on differential.

Trent Robinson has put forth one of the finest coaching seasons of the modern era to have this team not only alive in September, but still a dark horse for the title. They are just $1.25 to get the win over the Gold Coast Titans, but the last time these two clubs played earlier in the season it ended in a 35-34 shootout where the Roosters crawled across the line.

The Titans probably have no right to be anywhere near the finals in a normal season, but in 2021 they’ve only needed 10 wins to get there and come in as a $4 outsider. Styles make fights, and based off the form of their last game against the Roosters, they may cause them more headaches than perhaps the average fan can see on paper.

How the likes of Jayden Campbell and Sam Walker perform with finals expectations on them at such a young age will be one of the more interesting things to watch in this game. The Roosters have the -11.5 handicap at the line and should win reasonably comfortably, but the Titans will have their moments. It just all depends on how many ‘moments’ the Gold Coast can muster to make a real game of it.

When these two teams clashed only three weeks ago, it was a torrid contest. The South Sydney Rabbitohs shot out to a 12-0 lead before Nathan Cleary’s kicking game got the Panthers back into the game and the Panthers with the result by scoring 25 unanswered points to finish the game. It was the exact game Wayne Bennett will have gone through and pin-pointed exactly each moment where Souths got things wrong, so he will have them ready to go.

If Latrell Mitchell was available and not suspended, you could guarantee the Rabbitohs would be a mile shorter than their current $4 quote. The +11.5 line is attractive for the Bunnies, as you cannot underestimate the man managing abilities of Bennett. He may be forced to rely heavily on Blake Taaffe to play fullback, but they still have an excellent spine in Cody Walker, Adam Reynolds and Damien Cook who can manufacture points against just about anyone. If they remain calm and their forwards aim up, this game could need a field goal to decide it.

The Penrith Panthers as the $1.25 hot favourite look to have a little too much respect. Their last six weeks of football hasn’t been that great, and despite a big win over the Parramatta second-grade team, they haven’t quite hit the heights of their 12-game win streak earlier in the year. Their second half against the Rabbitohs a few weeks ago was impressive, but many will argue they were aided significantly by an unusually high 11-2 penalty count. In the past two seasons, the Rabbitohs have given away the fewest amount of penalties, so having that handicap once again would be extremely lucky.

Both clubs threw away the final game of their regular season, so the form guide is almost null and void for this clash. The Parramatta Eels come in as the $1.42 betting favourite, largely off their sensational performance to end the Storm’s winning streak in Round 24. This game will show us if that was the loss Melbourne had to have or if Parramatta’s win was genuine.

Eels coach Brad Arthur deep down probably believes there was a lot that went right for them against Melbourne and resting his players in the final round was the right move to make. If it had have been a finals game immediately after, they may have been in big trouble to get up mentally for an all-or-nothing game, so the schedule might be helpful to the Eels for this finals campaign.

The Newcastle Knights come in as the $2.90 outsider, and what we see on paper doesn’t quite match what is shown on the park. How does a team with Kalyn Ponga attack so poorly on a week-to-week basis? Did their constant injury toll throughout the season really hinder their progression? A bit like Parramatta, they saw the last game of the season as a necessary evil and got through it, but fans should take nothing away from it. The Saifiti twins and Jayden Brailey stiffen up their middle significantly, while Tyson Frizell and Mitch Barnett are consistent, battle-hardened veterans on the edges.

Parramatta have enough strike out wide to give the Knights outside backs plenty of problems, but if Newcastle dominate in the middle, it will make this game a lot closer than it probably should be. The two coaches are great mates and are leaning into the theory of having a fresh squad available, so it will be interesting to see who prepares their team better for the battle.