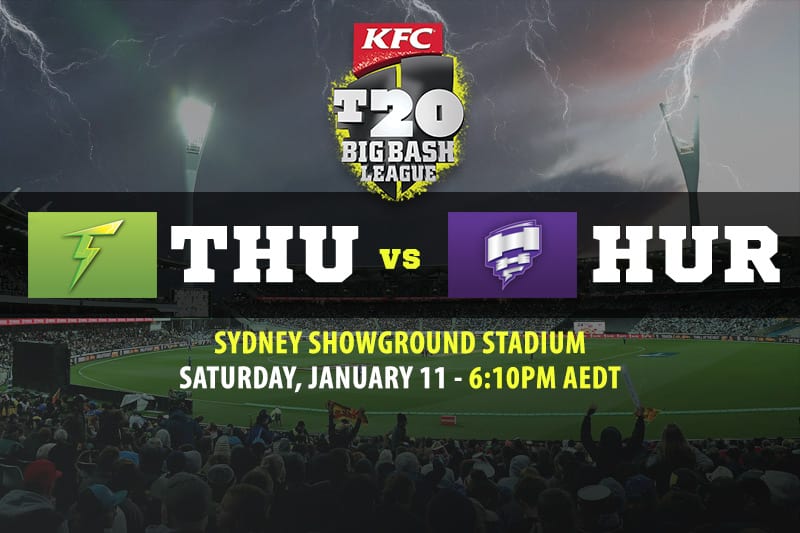 Watching the BBL on a Saturday doesn’t get much better than this, as the first match of a back-to-back will see the Sydney Thunder take on the Hobart Hurricanes at Olympic Park.

Both the Thunder and Hurricanes have won three BBL09 matches so far, making them decent chances to make the finals given the teams above them will lose several star players for Australia’s upcoming the tour of India.

Although the Hobart Hurricanes will lose their best player, D’Arcy Short, Tasmanian cult hero Matthew Wade will rejoin the roster as an opener-keeper now that the Aussies have completed their summer Test schedule.

Although the Thunder have lost Chris Green for the rest of the tournament due to a suspect bowling action, their team chemistry remains stable and well-balanced.

The men in green have a good array of top-order batsmen, but it will be interesting to see the conditions of the pitch in Sydney and also whether the Hurricanes will be switched on.

Alex Hales top Thunder runscorer @ $4.33 with Sportsbet
We are very happy to see Alex Hales back in cricket and playing well, as the pure talent he possesses makes the Sydney Thunder one of the teams to keep an eye on. Hales has played more than enough T20 games to understand that you need to keep your wicket, and if he can survive against the Hurricanes in the power play, he will be the best runscorer for the Thunder.

Matthew Wade top Hurricanes runscorer @ $3.40 with Sportsbet
Someone needs to fill the void left behind by D’Arcy Short, and the man for the job is Matthew Wade. The aggressive lefty formed one half of the BBL’s most devastating opening partnership last season, smashing 592 runs at 42.88 to finish second to Short in the scoring charts. Players dropping down from international level so often flourish in the Big Bash, so all signs point to big things from Wade.

Arjun Nair 2+ wickets
Most of the pitches in Sydney are favourable to accurate, consistent spin bowling, which brings Arjun Nair right into the game. The absence of Chris Green leaves Nair as the lead spinner for the Thunder, and he will need to step up immediately.

Qais Ahmed 2+ wickets
Going along with the spin narrative, Qais Ahmed becomes the obvious choice for the Hurricanes. The unpredictable young international is thoroughly enjoying his time in the limelight for the Canes, as he has taken eight wickets in six matches. Ahmed can even bowl bouncers as a spinner, which makes him tricky to face in a run chase.

Sydney Thunder to win @ $2.03 with Sportsbet
We like the odds for the outsiders in this one as the Thunder have been winning as underdogs all season. Matthew Wade is one of the best T20 cricketers in the country, but he can’t help with both bat and ball as D’Arcy Short does with his left-arm spin. Back in the Thunder’s top three batsmen to be the difference in this match.