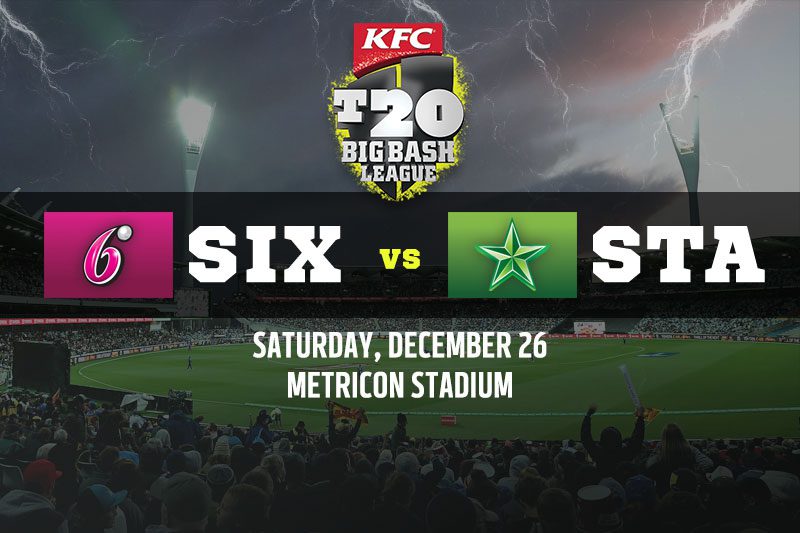 The Sydney Sixers and Melbourne Stars will face off at Metricon Stadium on Boxing Day in their first meeting since last summer’s Big Bash League Final.

The Sixers won three of their four meetings with the Stars last season, including the rain-affected championship decider, but can they get another win with Moises Henriques away on Test duty?

The Stars are yet to lose a match in BBL10, but they’ve only played two full games as their clash with the Perth Scorchers last week was washed out.

The Sixers have won their last two matches in emphatic fashion, so it’s all set up for a brilliant night of T20 cricket on the Gold Coast.

A long line of big hitters headlines the Stars’ front half, with names like Glenn Maxwell, Marcus Stoinis and Andre Fletcher. Another is Nicholas Pooran, who has hit more sixes (202) than fours (200) in his 156 T20 matches. Unless Josh Philippe has a brilliant game for the Sixers, the Stars should hit the most sixes.

Marcus Stoinis had some fun against the Sixers last season, hitting 147* in the first clash and following up with 62 off 37 in the second. If he can see off the first over and recapture some of the form he showed early last season, Stoinis should have no trouble passing the 25-run mark this weekend.

When the Sixers rolled the Melbourne Renegades for 60, it was Ben Dwarshuis who led the way with four wickets in less than three overs. The rapid lefty is a proven performer at this level and sits equal-third for wickets taken this season despite playing one game fewer than most of his competition. With no Sean Abbott or Tom Curran, Dwarshuis is the major threat in the Sixers attack.

The Melbourne Stars will be looking for revenge in this match, and now that they have Fletcher and Pooran in the top order, they should get it. Adam Zampa and Nathan Coulter-Nile have paired well so far this season, while Liam Hatcher looks a promising addition to an already strong bowling unit.