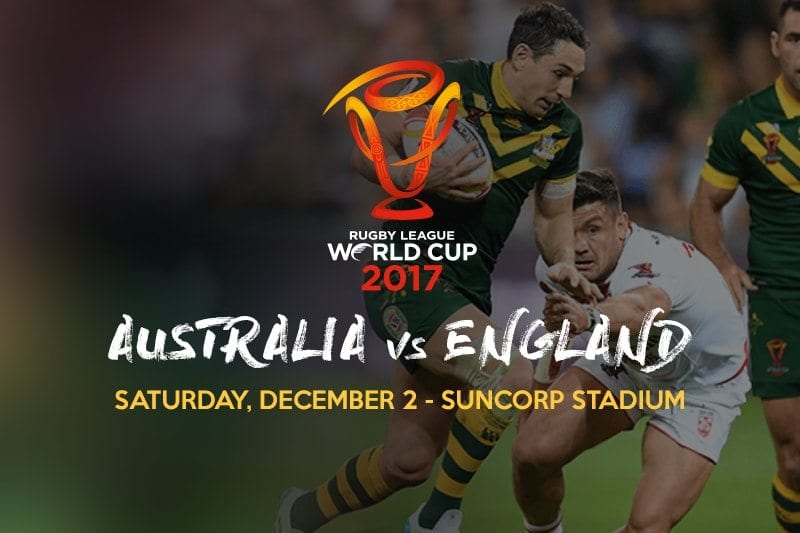 IT came as no surprise to see defending champions Australia installed as the hot favourite, but this Saturday’s Rugby League World Cup Final should be a close and exciting affair.

The Kangaroos have breezed into the final with wins against England, France, Lebanon, Samoa and Fiji, but this English side has improved since losing 18-4 in the first round of the tournament.

Surviving against Tonga last week, England have clearly been the second best team this year and punters shouldn’t be worried about the last 10 minutes in Auckland last week. They dominated the Tongans throughout the game and they had the right to get tired.

Expect an 80-minute performance from the visitors at Suncorp Stadium as they search for their first World Cup victory since desegregating from Great Britain.

We have looked through the form and past results this World Cup to find the best game tips and exotic options for the big dance on Saturday and we suggest signing up to CrownBet.com.au for the best odds around.

The Australian side has incredibly only given up 16 points throughout the entire tournament, which is simply outstanding.

They haven’t been adverse to scoring points either, having scored totals of 18, 52, 34, 46 and 54 in their five games to date. That doesn’t bode well for the English side which can struggle to score points, but finals are typically tighter contests.

In a team stacked full of State of Origin players, there has been one unsung hero which the Kangaroos are excited about. Reagan Campbell-Gillard has been terrorising the defence so far this World Cup and NSW Blues captain Boyd Cordner is confident of his future.

“Did you see his runs against Fiji? He’s an exciting kid coming through to watch. I didn’t know he was 24, I thought he was a lot older than what he was,” Cordner said.

“He’s a guy that has taken his opportunity with both hands. He’s been really good for Australia in this tournament and if he keeps going I’m sure he’ll get a lot more Tests.”

Campbell-Gillard will look to bolster a forward pack which already includes the likes of Aaron Woods, Tyson Frizell and David Klemmer. Still, the Kangaroos forward pack isn’t as impressive as its talented back line.

It’s possibly one of the best back lines in Australia league history and it has been winger Valentine Holmes leading the way in terms of tries. He scored 11 tries in just two World Cup games and skipper Cameron Smith believes he’s the most improved player.

“The thing that he’s developed the most is his preparation, more so his mental preparation than physical … he’s got great natural ability when he’s got the footy,” Smith said.

Holmes is the current $6 favourite at Sportsbet.com.au to score the first try of the game and we wouldn’t put it past him.

Bookmakers are expecting an easy victory for the Australians, with the 13+ option paying $1.57, but there’s better value with the 1-12 option.

This pays $3.50 at CrownBet and although the Kangaroos are the better team across the park, England’s defence is stout and scoring tries won’t come as easy this week.

There’s little doubting that Sam Burgess is the key to success for the English side.

The rambunctious forward has been in great form since returning from injury this World Cup and his experience and passion could be enough to see England get close this Saturday.

“We have been building for a while here and I guess it comes to a head this weekend when we play Australia in Brisbane,” Burgess said.

Another player looking to relish the occasion is late-inclusion Kevin Brown, who will partner Luke Gale in the halves.

The 33-year-old entered the team before the finals and has made the most of his chances.

“I’ve had a lot of highs and played in a couple of finals but nothing close to this,” Brown said.

“Playing for your country in a World Cup final is the absolute pinnacle. I could do this forever.”

His inclusion was due to Gareth Widdop switching to the fullback position.

“We all get on, we are all living the dream, that’s the feeling. We said before the semi-final: ‘We’ve got one more week in us,” Brown added.

Jermaine McGillvary is a noted try scorer and he tore the Tongan defence to shreds last week. The rangy winger is currently $17 to score first or $2.88 at Sportsbet to score at any time during the game.

He looks a good chance to score out on the wing and possibly get his side into the contest.

Deprecated: Theme without comments.php is deprecated since version 3.0.0 with no alternative available. Please include a comments.php template in your theme. in /home/bettingsite/public_html/wp-includes/functions.php on line 5061