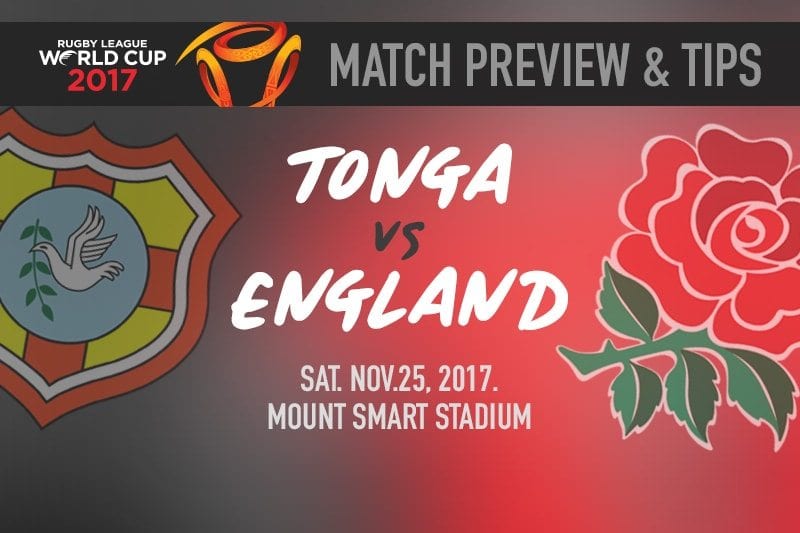 THE highly-anticipated semi-final clash between Tonga and England is set to be played in Auckland this Saturday (November 25, 4pm) and we have odds and free tips for the RLWC battle.

Controversy surrounded the Tongan national side before the Rugby League World Cup started with a number of their players switching from New Zealand and Australia just three weeks before the tournament, but that move has paid off so far.

The Tongans were able to defeat the Kiwis in the pool stages of the competition before lasting to beat Lebanon by two points last week. On the other side of the coin is England, which lost to Australia in their opening game before winning consecutive games.

Wins over Lebanon, France and Papua New Guinea have the English side in a good position for this game and bookmakers have them as firm favourites, but there’s a passion in this Tongan side and we think the wrong team is favoured at Mt. Smart Stadium this Saturday.

With the game taking place in Auckland, there will be an incredible support for Tonga and it should make for one of the most exciting games of the World Cup with the other semi-final of the weekend taking place on Friday between Australia and Fiji.

Tonga are one of those inconsistent sides that can either be rocks or diamonds, which makes it hard for punters to trust them, but they should be respected.

They have an NRL-packed team which includes the likes of Daniel Tupou, Michael Jennings, Andre Fafita and New Zealand ex-pats Jason Taumalolo and Tuimoala Lolohea.

Scoring their first ever win against New Zealand was a significant victory in the nation of Tonga and we think the hangover might have stretched into the Lebanon game, where they were less than impressive.

The narrow two-point victory didn’t inspire many and it has forced bookmakers to let Tonga drift out to around $2.40 for this game. We’ll take a look at the chances of the English side, but that price is good value for a capable side.

England weren’t expected to beat Australia first up in the World Cup and they didn’t. They have had three soft wins since then, but that lack of real opposition could hurt them here.

There’s no doubting that they’re giving away from physicality to the Tongan side, but where they lack in that area they make up for in professionalism.

England is a side that likes to game manage with the likes of Gareth Widdop Luke Gale controlling the play of the game. If Tonga get frustrated with the slower tempo, that could force them to make errors on offence.

This will play right into the hands of the English, but the $1.60 is too short in our opinion.

Punters will be taking a risk with Tonga ($2.40 at CrownBet), but the odds are in our favour and we’ll happily take the team that has points in them, whereas England could struggle to string tries together.

The winger has had a good tournament so far and he gets plenty of action out on the fringes for the Tongan side.

The New Zealand Warriors player has a knack of scoring in the corner and his long arms present defenders with plenty of challenges.

We wouldn’t be surprised to see Fusitu’a getting some quality early ball from the halves and he could cross for the first try of the game.

A weight lifting competitor in New Zealand, Konrad Hurrell is power personified and he poses a different threat to the defense.

The Gold Coast Titans player is tough to stop close to the line and he brings plenty of passion when donning the red jersey.

He does make mistakes, but he usually makes them late in the game when he’s tired, so the $20 in the first try scorer market is good value.

McGillvary is the only player at single-figure odds to score the first try.

The rangy winger scores tries at will in the Super League for Huddersfield and he has been in good form throughout the tournament.

He looks a good bet for the punters that are predicting an English win.

Australian punters will be familiar with Sam Burgess, who didn’t play much of the tournament due to an injury.

He’ll be pumped and ready to go for this clash against Tonga and if he can hold onto the ball as he attacks the line, we’ll be tough to stop.