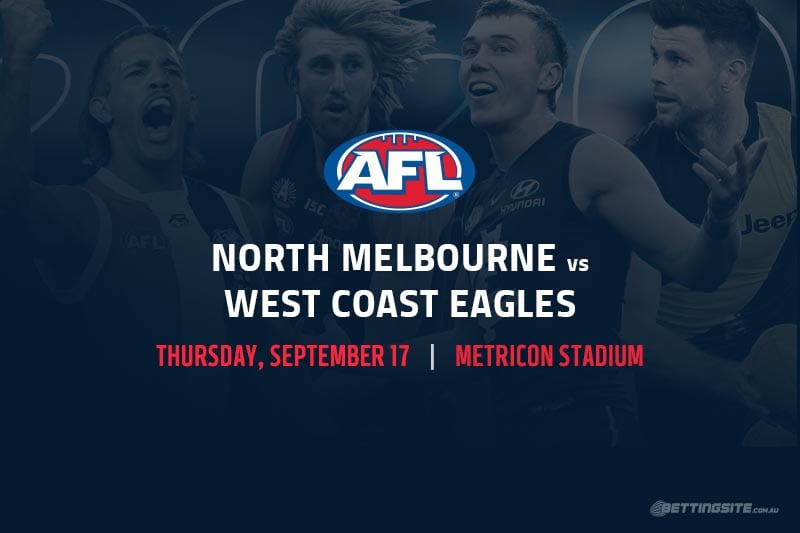 The opening match of round 18 will see the North Melbourne Kangaroos take on the West Coast Eagles at Metricon Stadium this Thursday night.

West Coast head coach Adam Simpson won two flags for the Roos as a player, but there will be no room for sentiment as the Eagles go in search of a top-four finish.

The Kangaroos have not won a match since demolishing Adelaide in round nine, which puts them in wooden spoon contention now that the Crows have won three in a row.

The Eagles won in round 17 over the Saints but didn’t make it through unscathed, as Jeremy McGovern went down with a hamstring injury.

While West Coast prepares for the finals, this could be the last chance for several North players to earn a spot on the list next season.

The Eagles do not have many prolific ball-winners with Luke Shuey and Elliot Yeo out injured, which is why we think Brad Sheppard provides great value at half-back. The Roos are not known for their clean ball use, and that brings players like Sheppard right into the game. With McGovern out and Tom Barrass playing deep at fullback, this is a great week for Sheppard to find the footy.

This is the best value for an Eagles goalkicker this week, as the hard-running midfielder is building some brilliant form before the finals. Kicking a goal and two behinds last round, Kelly lifted his intensity in the second half and fired more shots at goal. In what we expect will be a goal-fest from the Eagles, a midfielder that can push forward like Kelly will hit the scoreboard.

Percentage will not be a factor for the Eagles when the season ends, as the Tigers and Magpies drew with each other and Geelong is already too far ahead of them, but that doesn’t mean they won’t look to smash the Roos. A big win before the finals can ignite a team’s confidence, which is exactly what the Eagles need. Fremantle beat North Melbourne by 64 points in round 17, and we expect a similar margin in this one.