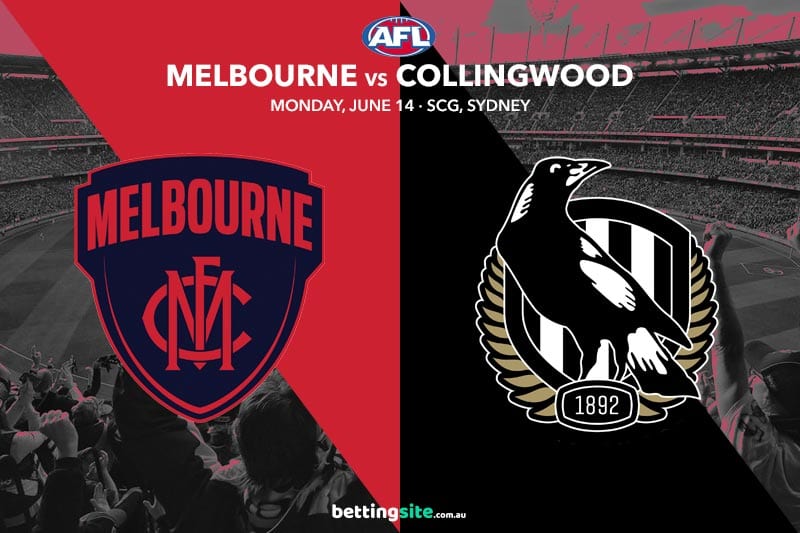 The Melbourne Demons and Collingwood Magpies will face off at the SCG for the traditional Queen’s Birthday AFL clash this Monday.

This will be the final match of Nathan Buckley’s coaching career at Collingwood, as the club champion announced during the week that he will step down at the conclusion of round 13.

Collingwood fans in Victoria will not have the chance to see off the Magpies legend, as this match was relocated to the SCG to avoid COVID-19 restrictions in Melbourne.

Ed Langdon will make his return from concussion for the Demons this week, which is likely to be Melbourne’s only change. The Magpies have confirmed the additions of Beau McCreery and Chris Mayne to their side, while Mason Cox is an outside chance to face the Dees.

Can the Magpies get up for their departing coach, or will Simon Goodwin’s league-leading Demons continue their winning ways?

The Demons easily defeated the Magpies last season by a whopping 56 points, as the Collingwood defenders could not stop the straight-shooting Dees. Nathan Buckley has emphasised team-defence this season, which has kept all of the Pies’ losses to below 30 points. Another close match will be on the cards, especially since Collingwood has won four of its last five matchups with Melbourne.

Simon Goodwin’s men are looking for their 12th win of the season this week, with their only loss to date coming against the Adelaide Crows in round 10. The Magpies are coming off a morale-boosting win against the Crows, while a win for Buckley this week would be a fitting end for a club legend.

Two of the more talismanic figures in the AFL will go head-to-head this week when Christian Petracca and Jordan De Goey face off at the SCG. Petracca has taken his game to the next level in 2021, while De Goey is still showing his brilliance in patches. Petracca is paying $2.88 with Sportsbet to collect 30 or more disposals, which he has already achieved four times this season.

After knocking off two top-four sides in the past fortnight, the Demons are going to be hard to beat. The Pies have not been blown out yet this season, as their defensive structures are still solid despite their lowly ladder position. It would take Collingwood’s very best to beat the Dees this week, and we don’t think they have it in them without Brodie Grundy or Taylor Adams.

Scott Pendlebury to get 25+ disposals

We expect Scott Pendlebury to be at his best this week in Nathan Buckley’s final match. Pendlebury has been hindered by a finger injury for the last month, forcing him to move out of the midfield to the forward flank. The Collingwood champion started at half-back against the Crows, but he also spent more time in the middle than he had in previous weeks.

Another loss to the Magpies is on the cards, but Scott Pendlebury will do his best to keep them in the contest. Christian Petracca will use Max Gawn’s ruck advantage to rack up disposals as Melbourne extends its lead atop the AFL 2021 ladder.