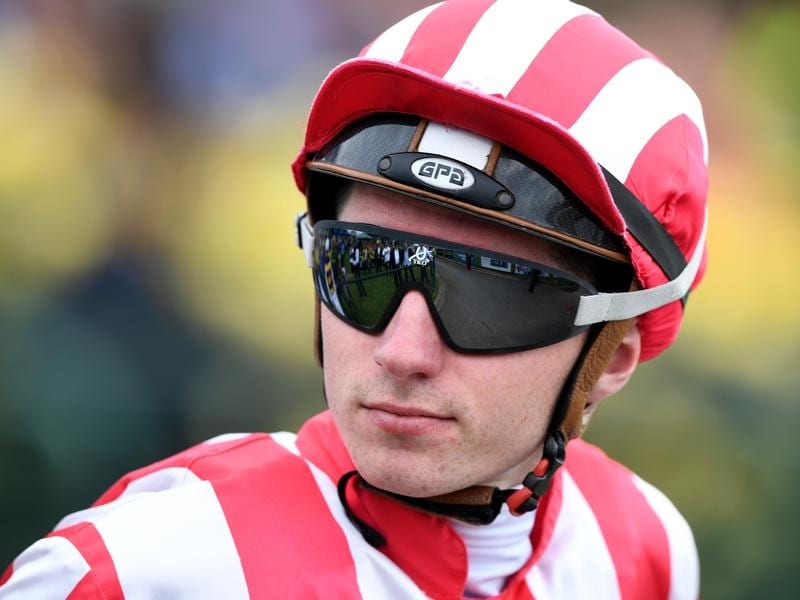 Jockey Tom Sadler has broken his leg in a freak accident in a steeplechase at Casterton.

A freak accident in a jumps race in Victoria has left jockey Tom Sadler rneeding surgery on a fractured leg.

Sadler, who stayed aboard his mount, was kicked by another runner that had fallen in a steeplechase race at Casterton on Sunday.

The jockey was left nursing a fractured tibia and spent the night at Hamilton hospital and was to be transported to Melbourne’s Epworth Hospital for surgery.

Sadler expects to be sidelined for between four and six months and hopes to return in time for the start of the jumps season next March.

He was dismayed at how the injury occurred to the inside of his leg, near the ankle.

“If anything you’d think it would be to the outside of the leg,” Sadler told RSN927.

Sadler was riding the well-backed $5 equal favourite Kuridala when two horses fell around 1500m from the finish.

“You can’t see the other side of the fence until you’re in the air,” Sadler said.

“About four strides in front of me Tailored had fallen and brought down Mannertone.

“As they were upside down having fallen their legs were coming down and one has whacked my leg, but I don’t know how it got the spot it has.

“It really hurt straight away and I couldn’t put any weight on it, so I kicked my feet out of the irons to start with and pulled the horse up because I was not going to get around.

“I felt a bit of a crack in the leg once I sat down and was pretty confident it was broken.”

He said if there was some good news out of Sunday’s mishap it happened at the tail-end of the season rather than the start.

“If I have to take positives it’s I’m missing minimal meetings,” he said.