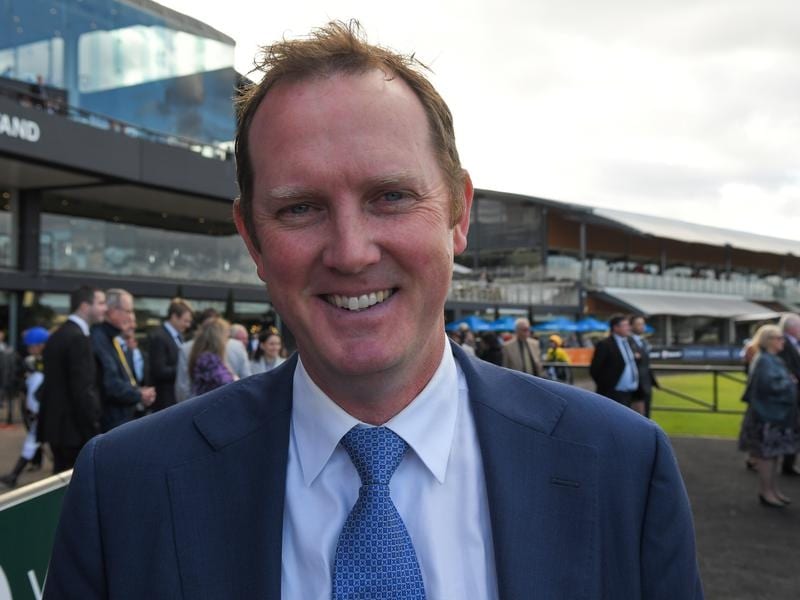 Co-trainer Michael Hawkes is hoping Rock can give the stable a second major mile in the Epsom.

Rock showed above average ability from the outset but was immature so the family training partners adopted a long-term view and took their time.

“We’ve had Slipper winners and so forth but you’ve got to let your horse tell you and do the talking,” co-trainer Michael Hawkes said.

“We gelded him early, we did the right thing by him and left him alone and now we’re starting to reap the rewards.”

Rock had established a handy record of three wins from seven starts when the trainers upped the ante and ran him in the Cameron Handicap at Newcastle, a traditional Epsom springboard.

The four-year-old put the writing on the wall, producing a devastating turn of foot to come from near-last and wide to score convincingly.

“His Cameron win might not have been in a vintage year but it’s the way he did it,” Hawkes said.

“He’s always shown he’s got very good ability, we’ve just been poking along from one step to another and all of a sudden you’re winning a Cameron and he’s come in through the back door into the Epsom.”

While patience has been key to Rock’s emergence, it was quick thinking from Hawkes that secured big-race jockey Kerrin McEvoy for the Group One mount.

Hawkes jumped on the phone to McEvoy’s manager and snapped up the lightweight rider shortly after Rock’s Cameron performance, knowing winning jockey Tommy Berry could not ride at 50.5kg.

Given all bar five of the 19 Epsom runners are carrying 51kg or less, the move has been a masterstroke, even with McEvoy riding a half kilo over.

Rock will be joined by stablemate Desert Lord in the Epsom with patience again playing a role for the Hawkes team.

Well down the order of entry, connections were almost resigned to running him in Melbourne on Saturday but, mindful there is often a high rate of attrition in big races, the stable kept the Group One dream alive.

They paid the acceptance fee for Desert Lord and waited.

“One thing has led to another and he’s in an Epsom,” Hawkes said.

“He’s third-up over a mile and once again he’s got no weight whatsoever, he’s drawn nine and he should have a lovely run there on the speed.”

If Rock or Desert Lord can win, it will deliver their trainers the second of Randwick’s two major miles this year.

They won the Doncaster with Brutal, who like Rock was lightly raced, although he claimed victory as a three-year-old while Rock has another year of maturity under his belt.

“Brutal is obviously a high quality horse having seven starts to win a Doncaster but this bloke, he’s just needed time being a Pierro and he’s gone the right way,” Hawkes said.