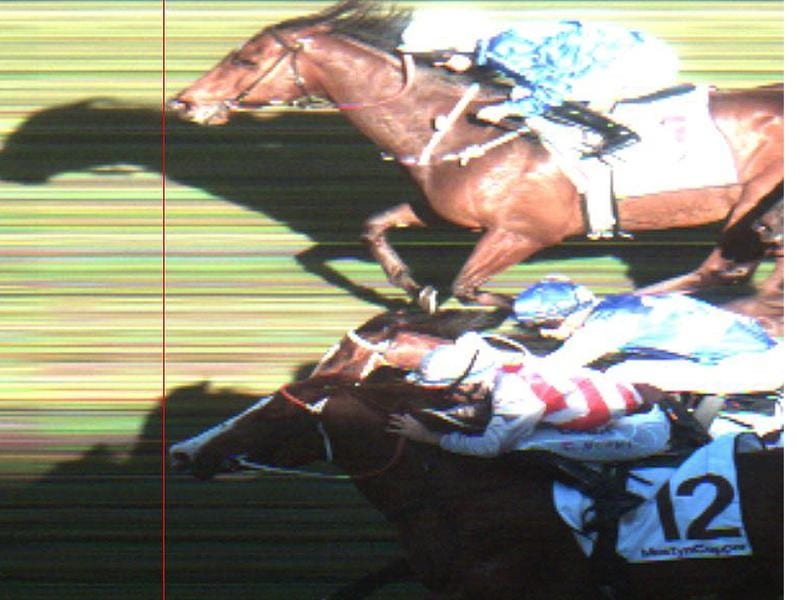 The barest margin separated the winner Deprive (top) and Trope (below) in the Show County Quality.

Rachel King and Godolphin sprinter Deprive have renewed their winning association – but only just.

In a finish that had his jockey anxiously waiting for the result, Deprive ($3.30 fav) got the decision by a nose over Trope ($4.60) to claim his first Group Three win in Saturday’s Show County Quality (1200m) at Randwick.

The two horses were wide apart on the track with Trope’s jockey Tommy Berry conceding defeat by unsaddling his horse without making his way near the winner’s stall.

King, who won two races including the Listed June Stakes on Deprive in the winter, said she had no idea.

Deprive’s victory capped a big week for King who has announced her engagement to fellow rider Blake Spriggs.

“I couldn’t see. The sun was glaring and I knew Trope was finishing really well but I had no idea who had won,” King said.

“Obviously his wins before were in the winter and it’s always hard to stand up when they come back in the spring but he’s just such a tough little horse.

“He was fit and ready to go and he’s only going to improve for today.

“He had a good blow and he was just peaking on his run with 50 metres to go but he’s just got the best attitude. He just wants to win.

“Hopefully he’s a Group One horse and hopefully my name is next to his.”

Deprive’s attempt at a Group One win could come in next month’s Sir Rupert Clarke Stakes (1400m) at Caulfield.

“We’re tempted to try him in something in Melbourne like the Sir Rupert Clarke Stakes.” trainer James Cummings said.

“He vindicated a couple of really solid performances in the winter. He’s still winning at Randwick. He’s five from five here.

“It was a nailbiter. Trope is a pretty capable galloper with an impossible finish. We’re honoured and a little flattered to have beaten him.

“Rachel was really confident in him and he has a really good winning attitude.”

“They didn’t go as quickly as I thought they would,” he said.

“The winkers were good for him. He’s going great, super.”