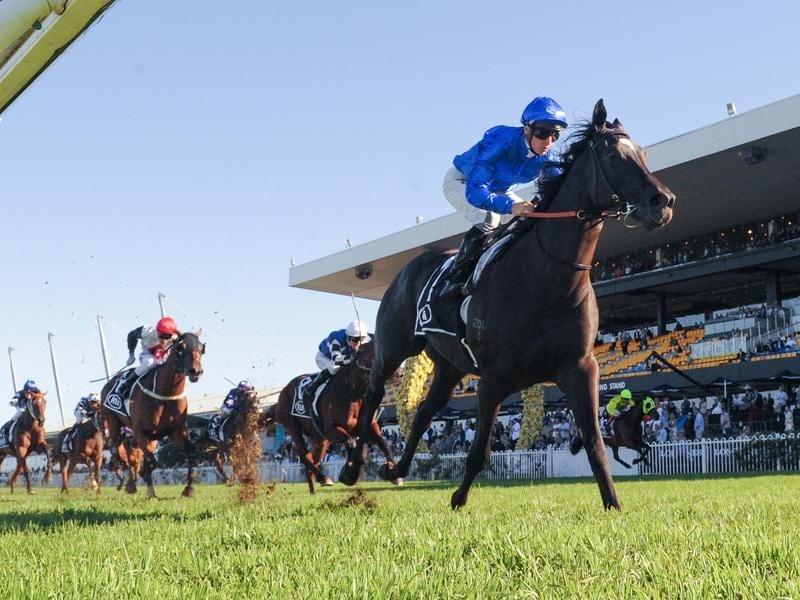 Avilius is favourite to win the George Main Stakes on what will be a heavy Randwick track.

Sydney’s wet weather has boosted trainer James Cummings’ confidence Avilius can turn the tables on Samadoubt in the Group One George Main Stakes.

The Bjorn Baker-trained Samadoubt has been the surprise packet so far during the Sydney spring, winning the Group One Winx Stakes (1400m) then backing it up with another all-the-way victory in the Group Two Chelmsford Stakes (1600m).

Avilius has finished fourth and second respectively in those two races but his record says a heavy surface at Randwick on Saturday is in his favour more than some others.

He has two wins from two starts on heavy ground, both at Group One level in the Ranvet and Tancred Stakes in the autumn.

“I like the fact that the rail’s back in the true position and with a lot of rain around this week Avilius really comes at it from that perspective,” Cummings said.

“I’m confident he’s gone ahead since the Chelmsford. It was a good effort but he was nowhere near the winner.

“He was just in a different postcode, the winner, but from the half mile to the furlong he (Avilius) was good.”

Samadoubt beat Avilius by 3-1/4 lengths and has performed reasonably in lesser company on rain-affected tracks with three wins and two placings from 10 attempts.

Cummings says the Cox Plate and Caulfield Cup are targets for Avilius who is favourite for the George Main ahead of veteran Happy Clapper and Samadoubt.

“The Cox Plate is an obvious target and the Caulfield Cup is also in our minds,” Cummings said.

“Under the right circumstances he could even run in both, but nothing is set in stone.”

New Zealand mare Danzdanzdance has never won on anything better than soft and has a third to Avilius in the Ranvet to her credit.

Australian Oaks winner Verry Elleegant has also firmed as punters look for wet track horses with her record five wins and one second from six starts on soft or heavy.

The Australian Turf Club’s manager of racecourses, Nevesh Ramdhani, says a heavy 8 is the best rating that can be expected even with fine weather on Friday.