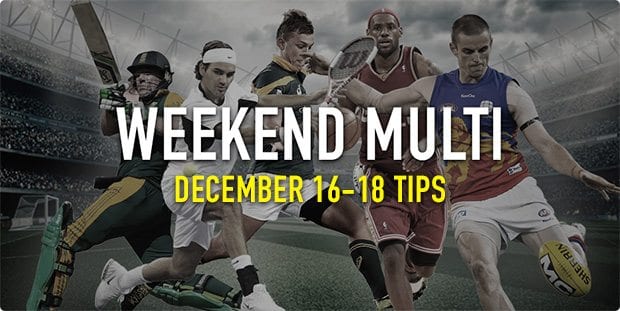 ANOTHER weekend is about to roll around, which means we have another huge set of sporting fixtures for weekend multi enthusiasts to sink their teeth into.

This weekend sees the return of racing to Royal Randwick for the Group 2 Inglis Villiers Stakes, as well as A-League action, NBL basketball and English Premier League, and we have taken our best bets from all four events and put together a rock-solid multi, which we are backing to bank us some pocket money heading into the Christmas break.

All odds for this weekend’s action were provided by Sportsbet.com.au.

Selections for the December 16-18 Weekend multi:

Fabrizio to place in the Inglis Villiers Stakes ($1.35)

The first leg of our weekend multi begins at the newly-renovated Royal Randwick racecourse on Saturday afternoon for the feature race of the day the Inglis Villiers Stakes.

We are backing Gai Waterhouse runner Fabrizio to run rings around this field on Saturday. The five-year-old gelding is shooting for a third straight win and looking to be in peak physical condition heading into the group 2 race.

As this is a multi we are only electing to take the place here to help mitigate any bad luck we could potentially incur, but we would not be surprised to see Fabrizio salute on Saturday.

Fabrizio to place in the Inglis Villiers Stakes – $1.35

We are heading west for the second leg of our multi as Sydney FC travels to Perth to face the Glory.

Sydney FC remain undefeated in the A-League and look to be the best team in the competition. Their 1-1 last weekend against Melbourne City showed that there is grit beneath the flashy exterior of their team.

The Glory last week were ordinary to say the least. Their 2-1 loss to Newcastle was as bad a loss as they have had in the last two years in the A-League.

We cannot see this match going any other way besides a victory for the Sky Blues. They have too much class and firepower for a lacklustre Glory outfit.

A top of the table clash between Adelaide and Sydney awaits punters for the third leg of our multi this weekend.

The Kings are on top of the NBL ladder and look to be a class above the competition this season. Not only are they two games clear of their closest rivals but they also have the healthiest percentage in the league.

Adelaide currently occupies second position on the NBL ladder despite playing less games than the teams placed around them. They possess dangerous attacking options and play hard and strong defence.

We are taking the Kings here. They look to be the team to beat this season and they should maintain their two-game buffer at the top of the NBL ladder.

Last leg of our multi is in the English capital as Tottenham host Burnley at the Lane.

The Spurs are back in top-four contention after a strong 3-0 win over Hull last time out. Tottenham managed to create plenty of chances despite no scoring input from striker Harry Kane.

Burnley’s sporadic season continued midweek after they lost 1-0 to West Ham on Wednesday. The Clarets were unlucky to come away empty handed, but they will be buoyed by their strong win against Bournemouth the weekend before.

This match seems like a formality to us. Tottenham should win this game easily to round out our multi in a winning way.