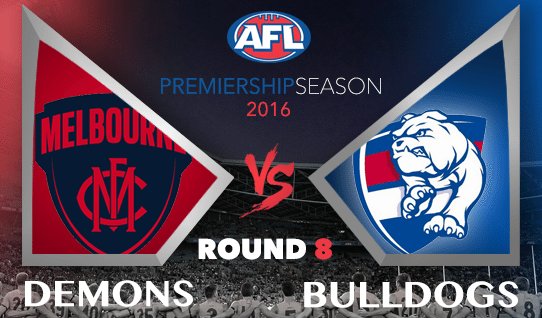 MELBOURNE’S bearded man mountain Max Gawn is enjoying the season of his life.

And, as the touring ruckman prepares to square off agains the in form Western Bulldogs, our mates over at sportsbet.com.au have slashed his Brownlow Medal odds from a massive $1001 to a much tighter $34 on the back of a dominant performance against the Gold Coast Suns.

The Dogs are going to have their work cut out for them this weekend trying to stop the big fella, who is averaging career highs across the board.

Having never played more than 13 games through his first four seasons, Gawn has appeared in all seven of Melbourne’s contest this year, averaging 41.1 hit outs per game – better than any ruckman in the game – with 20 per cent of those going to his teams advantage, which is also number one.

It is early days, but some are saying he has taken North Melbourne superstar Todd Goldstein’s mantle as the number one ruckman in the competition.

It is hard to argue when you see he is averaging 15 disposals to go with nearly five marks, three clearances and a goal.

sportsbet.com.au’s Rich Hummerston reports Gawn has been hammered by punters, with 20 of them backing him at the $1001 quote with the bookmaker, one of those standing to collect over $100,000.

“Boasting the best beard in the AFL, Gawn has come from relative obscurity to not only put his hand up for All-Australian selection this year, but as a genuine contender for this year’s Brownlow,” Hummerston said.

“Starting the season as a $501 chance, he drifted out to $1001 after Melbourne’s round two loss to Essendon, before his incredible turn of form caught the attention of punters and saw his price plunge to $34.

On the weekend, he put the Gold Coast Suns to the sword, with 46 hit outs, 17 touches, 13 of those contested, six clearances, five tackles, four marks and two goals.

That effort would have pleased both punters and Supercoach players alike, after he churned out 174 points for the round, better than any other player last week.

His Brownlow odds will probably be slashed again, as he is set to have his way with the improving, but not there yet, Jordan Roughead.

While the big man has had his Brownlow odds hammered in, he has also shown serious prowess around the goals and we are backing him in this week to slot the first at $26. A lot will need to go right, but the Demons big man has shown enough that you can have a tiny drink on him and know you are a chance.

Jack Viney over 30 disposals ($2 with sportsbet.com.au)

The powerful Demons midfielder has been the biggest beneficiary of Gawn’s superb work and had a three game purple patch of 31, 37 an 30 disposals. Only had 24 in the big win over the Gold Coast on the weekend, so we are expecting a big bounce back game in an important clash with the Dogs. Proving this is a midfielders competition, Viney is also the Demons’ favourite for the Brownlow, at $23, ahead of Gawn.

Lachie Hunter over 30 disposals ($1.41 with sportsbet.com.au)

We could almost write exactly the same thing of Hunter as we did of Viney. Young gun midfielder coming of age in 2016. His three game purple patch was even gaudier than Viney’s, though, with 33, 32, then a massive 44 against top of the table North Melbourne. ‘Only’ had 25 in the Dogs win over the Crows on the weekend and should bounce back with a biggie against the Dees.

Two of our favourite teams at and we want to go with the improving Demons, but the weight of evidence has tipped us toward the Dogs. Melbourne absolutely whacked an undermanned Gold Coast on the weekend, while the Doggies were inspiring in their tight victory over Adelaide, a much tougher opponent. We’re predicting a close one, but the more seasoned Dogs should be able to get the job done against a Melbourne side on the rise. We reckon this one could either be a very tight contest or the Dogs will completely blow the Demons out of the water, so it was hard to settle on the line. With the Dogs playing their first game on the MCG this season, we’re backing the Demons to keep it close on their native territory and keep the margin under two goals.