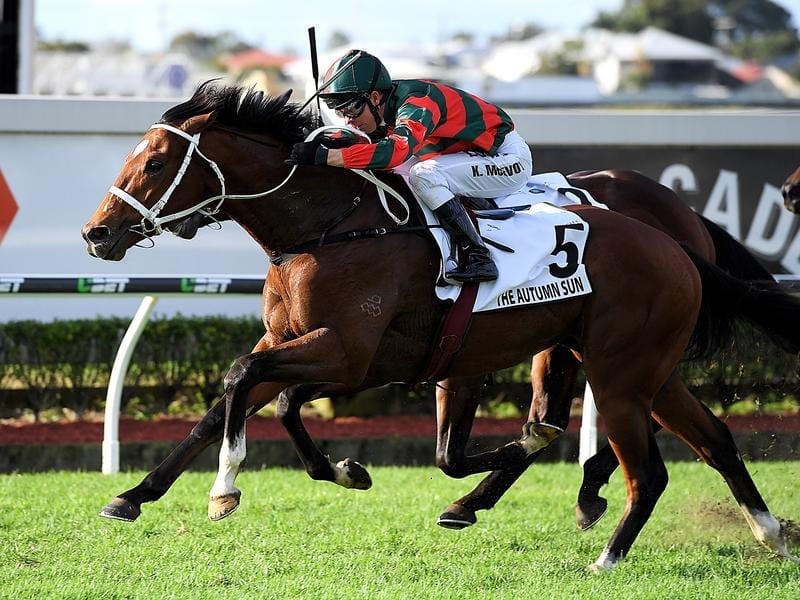 The Autumn Sun has a grip on Caulfield Guineas favouritism after drawing barrier 5 in the G1 race.

Star colt The Autumn Sun remains the short-priced favourite to land his third Group One win after the barrier draw for the $2 million Caulfield Guineas.

The Autumn Sun is set to jump from gate five in Saturday’s 1600m Guineas for three-year-olds in a field which has already been reduced to 14 runners after the scratching of Ranier.

The Godolphin-owned Ranier had come up with the outside barrier at Tuesday’s draw.

Earlier in the morning, the Chris Waller-trained The Autumn Sun got his first look at Caulfield in a pleasing work-out on the course proper in company with Group One-winning stablemate D’Argento.

James McDonald rides The Autumn Sun in a race for the first time on Saturday and believes it was beneficial for the last-start Golden Rose winner to get that experience at Caulfield before Saturday’s big race.

“He’s a very nice horse and hopefully he can get the job done.

“He was very balanced around the bends which is very important. I know galloping track work is a bit different to race pressure but I was pretty happy with the way he got around the bends.

“His leads were really good and he finished his work off really nicely. So I couldn’t be happier really.”

The Autumn Sun was into $1.90 on Tuesday and McDonald is confident the colt is the horse to beat.

The Darren Weir-trained pair, Native Soldier and Leonardo Da Hinchi, are next in the market at $7.50 and $8 respectively.

Native Soldier has led all the way to win the McNeil Stakes and Caulfield Guineas Prelude at the track this spring and has barrier four with apprentice Ben Allen to ride.

“I’d say the plan will be to lead,” Allen said.

“He seems to settle much better when he’s out on his own.

“If we can get there without doing too much work we’ll probably lead. If others want to go hard then we can take a sit.”

Trainer Tony McEvoy is pitting Oohood up against the colts and geldings, with the last-start Flight Stakes winner drawing barrier six for her attempt to become the first filly to win since Surround in 1976.

McEvoy believes she is ready to produce a peak performance.

“She’s a very good filly and getting two kilograms off the colts is very significant when there’s not a lot between them.” McEvoy said.