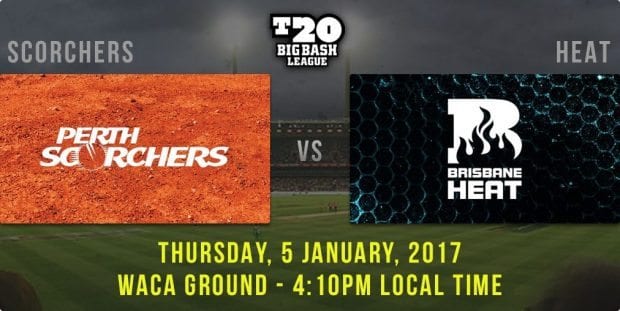 That’s the record these two teams share heading into Thursday’s table-top tussle at the WACA.

Perth Scorchers hold pole position heading into the second half of the 2016-17 Big Bash League fixture.

While they haven’t exactly dominated, the West Australians have done enough to work their way into $3.50 favouritism in the outright betting at Sportsbet.

They were very good against Sydney Thunder last time out, with the pace assault of David Willey, Andrew Tye, Mitchell Johnson, Mitchell Marsh and Jhye Richardson running the show.

This will be the last Big Bash game for the in-form Willey before he flies out to join the England squad for the ODI series in India.

His spot on the Scorchers roster will be taken by Tim Bresnan, the former Ashes star.

Ian Bell and Michael Klinger are in fine touch in the top order, while Shaun Marsh’s slow start to the season only means there is plenty of room for improvement.

They have a hole to fill in the middle order, however, with captain Adam Voges forced to retire hurt against the Thunder after straining his hamstring.

The powerful Hilton Cartwright is away on Test duty, so Cam Bancroft – one of the hottest prospects in Australia this time last year – could make his first appearance of BBL06.

Also in Sydney for the New Year’s Test is Ashton Agar, although his exclusion from the final Australian XI could make him available for Thursday’s clash.

Brisbane Heat have some serious personnel issues of their own.

Star spinner Samuel Badree is out of action after hurting his hamstring in the defeat to Sydney Sixers on Tuesday.

“Samuel will have a scan as soon as possible and we will assess him for there, so he will not travel to Perth,” revealed Martin Love, the club physio.

Also in doubt is Chris Lynn, who jarred his troublesome shoulder in the outfield.

The 26-year-old Queenslander leads the Big Bash runscoring charts after four games with 211 runs at an average of 105.50.

“We’ll see how he is feeling when we get to Perth but hopefully it settles down quickly,” Love added.

The loss to Sydney was the Heat’s first of the season, pushing them down to second spot on the ladder.

It was also the first time in BBL06 that their underdog bowling attacking failed to do the job.

Mark Steketee had a night to forget, conceding 45 runs from three overs and failing to take a wicket.

But there was a bright light in Nick Buchanan, who made a long-awaited return to Big Bash cricket after several years out through injury.

Mitch Swepson put in another promising shift, and the young leggy will have a hell of a job to do at Perth in Badree’s absence.

His older brother is yet to have hit his stride in BBL06, but Marsh the younger has looked in ominous touch.

Mitch put in an excellent shift at number four against the Thunder, smashing 44 at a very healthy 162.96 strike rate.

In fact, the 25-year-old allrounder has scored 30 runs or more in each of his four innings so far.

And although he is the fifth seamer in a power-packed pace attack, he has bowled with great economy while contributing key wickets.

Scorchers coach Justin Langer is keen to get the most out of Marsh before Australia’s ODI series later this month, especially with Cartwright and Voges unavailable, so he’s well worth a punt in all the major player markets.

Which of the walking wounded will triumph?

Scorchers are missing Cartwright, Voges and possibly Agar – the match-winner against Melbourne Renegades.

They are also without gun quicks Jason Behrendorff and Joel Paris, both of whom were sidelined in preseason.

But those guys are well covered in a squad that is without doubt the deepest in the division.

Perhaps more significant than all of Perth’s problems combined is absence of Badree.

The West Indian spinner is the lynchpin of a Brisbane bowling unit that is otherwise sorely lacking in star power.

And while the Heat’s top order is among the best in the business, an unfit Lynn takes out a huge chunk of their quality hitting.

At home, with that bowling attack, the Scorchers will be hard to beat.