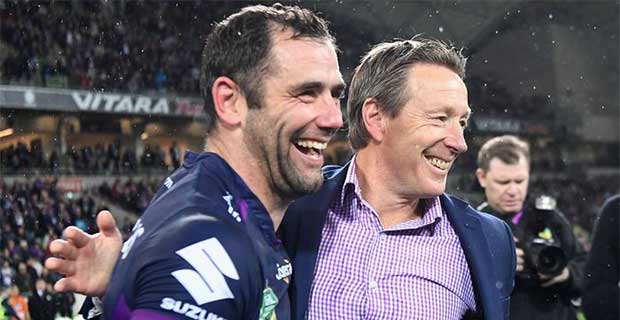 THE Melbourne Storm might be the $1.80 favourites heading into Sunday night’s NRL decider at ANZ Stadium, but a pair of rugby league pundits believe the Victorians are fortunate to be there.

NRL hall of famer Andrew Johns said a similar performance from the Storm on Sunday would see the Sharks securing their first-ever premiership in their 50 year existence.

“They didn’t have much luck, the Raiders. The Storm were OK, but if they are going to trouble the Sharks next Sunday, they have to improve and improve a lot.

“They had conditions to suit, wet and slippery. But the conditions for next Sunday are going to be dry, which will suit Sharks.”

Fellow NRL Hall of Fame member Darren Lockyer agreed, saying the Storm need to lift their output significantly if they are to hoist the Provan-Summons Trophy for a second time in four years.

“Defensively the (the Storm) were strong, but I thought they had a bit of luck.” Lockyer said.

“They got a lot of penalties and they ended up only beating the Raiders by two points at home.

“The Raiders had a few injuries and had a few chances they dropped.”

The Sharks were far more comprehensive in their 32-20 victory over the North Queensland Cowboys on Friday night.

Cronulla head into Sunday as the $2 outsiders for the grand final, but Johns and Lockyer believe the Sharks are the team to beat on Sunday.

Smith happy that Gallan gets his shot

They may be bitter enemies on Sunday, but Melbourne Storm captain Cameron Smith was still able to see the romance in Shark stalwart Paul Gallan finally getting a grand final appearance.

Cameron Smith ($6) and Paul Gallan ($13) will be key figures in Sunday night’s grand final and are first and fifth in Clive Churchill medal betting at Sportsbet.com.au.

The two men have been long-time combatants on the field after captaining their opposing states over the course of the decade, but it will be the first time the pair have met on the NRL’s biggest club stage.

The Storm captain said he is pleased Gallan finally gets his shot at the NRL premiership and he looks forward to renewing hostilities on Sunday night.

“I always enjoy playing against Gal. I see him a bit because we play in the middle,” Smith said.

“I’m pleased for Gal. He has waited a long time for this. He works hard every time he pulls on the jersey. He has given a lot to the Cronulla club over many years.”

Gallan and Smith have long been considered bitter rivals, but after the NSW captain turned his back on the State of Origin winning Queensland as they accepted the shield the rivalry hit fever pitch.

The Storm captain said that while the idea that the duo hate each other adds another fascinating aspect to an already enthralling grand final, the pair have buried the hatchet.

“I’ve spoken to Gal about that. We’ve discussed it and moved on,” the Melbourne Storm captain said.

“At the time it was an issue for a few of us. He explained to me what happened. I’m happy with that explanation. There is not going to be anything from State of Origin lingering around. He contacted me to clear it up because there was a fair bit of talk in the days after that Origin.

“He explained to me what happened and I was happy with his explanation. We’ve moved on. We’ve played each other since then. It’s all good. We’ve all explained what we thought on the night. It was disappointing for us. We’ve moved on. It’s been a long time now. I’m not concerned with it.”

Our trusted bookmakers have committed to offering their clients the best possible deals throughout the entirety of the NRL season and they are bringing their A game for Sunday night.

Sportsbet.com.au is offering punters the chance to double their winnings – up to $50 in bonus bets – on their head-to-head NRL grand final bets.

Rather invest on the first try scorer market?

Place a first try scorer bet on the Storm vs. Sharks decider and if your player crosses the line at any time but fails to register the first major you will get your stake back up to $50.

WilliamHill.com.au is dedicated to offering their customers the best possible odds on both head-to-head and line markets for this Sunday; so much so that they are guaranteeing it.

William Hill is promising to beat all the advertised prices on the outcome market and line betting options, meaning it is the place to go for Sunday afternoon for punters keen on investing on the grand final outcome.